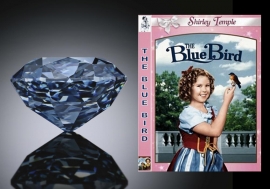 The Shirley Temple blue diamond caught everyone's attention exactly three years ago when it hit the auction block at Sotheby's New York with an estimated price between $25 million and $35 million. The highest bid was $22 million, which was below the ring's reserve price and it failed to sell. However, the cushion-modified brilliant-cut fancy deep blue diamond, formerly weighing 9.54 carats of VVS2 clarity, has been given a new lease on life: jewelry dealer Windsor Jewelers acquired the rare stone and took the sizeable risk of recutting it, but the result is flawless.

“We showed it to some of the best cutters in the world and said there’s a potentiality for it to go internally flawless,” explained Windsor Jewelers President Paul Lubetsky to Ashley Davis of National Jeweler. This is precisely what happened. The recutting resulted in an internally flawless stone now with a richer blue color. They did lose some size, as it was reduced to 9.3 carats, but Windsor is likely to be rewarded for having taken the risk. Windsor Jewelers will put the diamond on display publicly for the first time since its acquisition and polishing at the second edition of the upcoming GemGenève GenevaInternational Gem and Jewellery Show from 9-12 May.

Click the 'Read the full article' button to read the National Jeweler article.