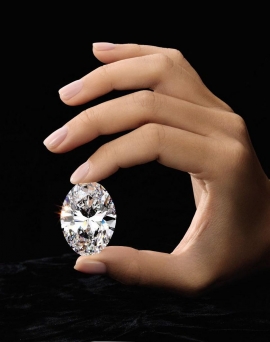 Described as “perfect according to every critical criterion,” an 88.22-carat diamond will go under the hammer at Sotheby’s Hong Kong, with the auction house expecting the oval-cut gem to fetch as much as HK$100 million (about US$12.7 million). According to an announcement released by Sotheby’s yesterday, the stone is one of only three oval-cut diamonds with a weight greater than 50 carats “to appear at auction in living memory, and the largest to be auctioned in over five years.” The 88.22-carat, D Colour, Flawless, Type IIa, Oval Brilliant Diamond will hit the auction block at Sotheby’s Hong Kong Sale of Magnificent Jewels and Jadeite on 2 April 2019. Taking the middle ground of the estimated price of US$11.2 - 12.7 million, the diamond would fetch about $136,000 per carat.

The 242-carat rough stone which yielded the diamond was discovered at the Jwaneng mine in Botswana, a mine owned in partnership by De Beers and the government of Botswana and known for producing roughs of the highest quality. Following its discovery, the rough was cut and polished over a period of intense months to produce a symmetrical and striking oval brilliant diamond. Patti Wong, Chairman of Sotheby’s Asia, said: “When you think that one ton of mined earth yields less than a carat of diamond, and that high quality diamonds over 10 carats are a rarity, the discovery of a 242-carat rough, of gem quality and exceptional size, is nothing short of a miracle."

Given the elongated shape of the rough, the oval shape was chosen to preserve the greatest amount of weight. “For those who have had the chance to see the diamond, one adjective comes back: ‘breathtaking,’” said David Bennett, worldwide chairman of Sotheby’s international jewelry division. “Barely any diamonds of this weight are known to possess the same exceptional qualities of purity and perfection as this remarkable stone, which is so full of fire and blinding brilliance.”

A symbol of perfection and eternity, often associated with prosperity, the number eight is considered a lucky number in China and other Asian cultures. The Chinese pronunciation of 8 (bā), similar to that of 發 (fā) meaning wealth or fortune, is welcomed as a blessing of affluence. In its duality - 88 – it is believed to bring good wishes in abundance. There is also a visual resemblance between 88 and 囍 (literally: "double joy"), a popular decorative design composed of two stylized characters 喜 ("joy").