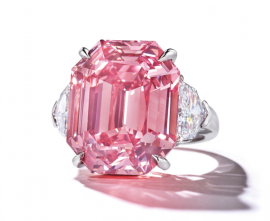 The “Pink Legacy”, a diamond weighing just under 19 carats, fetched 50.375 million Swiss francs ($50 million), at Christie’s Magnificent Jewels sale in Geneva, setting a world auction record. U.S.-based luxury jeweler Harry Winston, owned by Swatch, purchased the rare gem, Christie’s said on Tuesday, and promptly renamed it “The Winston Pink Legacy”. The Fancy vivid pink, VS1 clarity, Type IIa cut-cornered rectangular-cut diamond weighing 18.96 carats, was sold for $49.9 million, or $2.6 million per carat, which is a world record price for a pink diamond. That record was previously held by ‘The Pink Promise’, an oval-shaped Fancy Vivid Pink diamond of just under 15 carats, which Christie's sold in Hong Kong last year for $32,480,500 - or  $2,175,519 per carat.

Not only is "Fancy Vivid" the highest grade of color intensity, but the diamond is also an even rarer find because of its size, as Fancy Vivid Pink diamonds larger than 10 carats are "virtually unheard of," according to Christie's. Rahul Kadakia, International Head of Jewellery at Christie's. "The saturation, the intensity of this stone is as good as it gets in a colored diamond. To find a diamond of this size with this color is pretty much unreal," he continues. "You may see this color in a pink diamond of less than one carat. But this is almost 19 carats and it’s as pink as can be. It’s unbelievable." Christie's explains that in the Fancy Vivid Pink (FVP) range, diamonds of more than five or six carats are rarely encountered. Fewer than 10 percent of pink diamonds weigh more than one-fifth of a carat. In the saleroom, FVP diamonds over 10 carats are virtually unheard of - in over 250 years of auction history at Christie’s, only four such stones have ever appeared for sale. While The Winston Pink Legacy set the record for highest value on a per-carat basis for a FVP diamond, it is not the most expensive FVP diamond ever sold. That distinction belongs to The Pink Star: a 59.60-carat oval mixed-cut FVP Internally Flawless diamond, which Sotheby's sold for $71.2 million on April 4, 2017.

Once owned by the Oppenheimer Family, who built De Beers into the world’s biggest diamond trader, the diamond had a pre-sale estimate of $30 to $50 million. The identity of the seller was not disclosed.