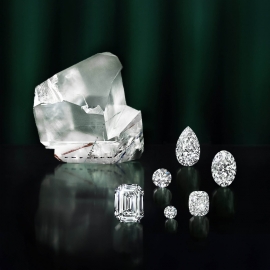 Following more than a year of detailed analysis, cutting and polishing by an elite team of gemologists and master craftsmen, Graff Diamonds has started to unveil some of the more than 60 polished diamonds cleaved from the 1,109-carat Lesedi La Rona. The polished diamonds, Graff writes, range in size from under a carat to in excess of 100 carats, each diamond will have D color, the highest grade for a diamond, and exceptional clarity. They will be set mounted as solitaire rings, earrings and pendants.

Lucara Diamond Corp. unearthed the Type IIa diamond, which weighed 1,111 carats before cleaning and 1,109 after, at its Karowe mine in Botswana in November 2015. The miner took the historic stone on a world tour in 2015 prior to it going on the auction block. The stone came to be known as the “Lesedi La Rona,” meaning “Our Light” in Setswana, and is the second largest rough diamond ever recovered, and the largest in the over a century (read the story of the Lesedi La Rona here). Laurence Graff in 2017 bought the incredible stone for $53 million, or $47,777 per carat after the diamond failed to sell at a Sotheby’s auction in London in June 2016, where its estimated reserve price was $70 million or higher.

Graff Diamonds says, "With the Lesedi La Rona collection, clients of Graff are being given a once in a lifetime opportunity to own a piece of diamond history. Destined to be passed down through generations, the legacy of this historic stone will live on in this truly remarkable collection of jewels."