India Hikes Import Duties on Polished Diamonds From 5% to 7.5% 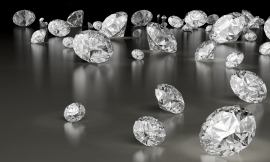 The CAD represents the difference between inflows and outflows of foreign exchange, which grew to 2.4% of GDP in the April-June quarter. According to the Times of India, curbing non-essential imports was part of the five-pronged steps the government announced to curb the growning current account deficit and capital outflows. The large trade deficit and the rupee's decline against the US dollar are putting pressure on the CAD, and these steps are likely to have a positive impact on the external sector.

India imported $2.24 billion worth of cut and polished diamonds in FY 2017 (April '17 - March '18), a 15% decline compared to the year prior, according to figures from the Gem and Jewellery Export Promotion Council (GJEPC). For the first five months of 2018 (April-August), imports of cut and polished diamonds have fallen by 41% to $605 million. Imports of colored gemstones fell by 62% last year to $545 million, and are down by 68% for the first five months of 2018.