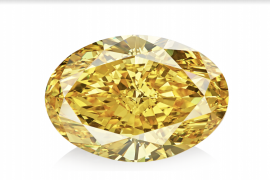 Russian miner ALROSA's first “True Colours” auction of fancy colored diamonds garnered $9 million from 210 stones. Described as, "another significant step towards our goal of becoming the world leader in the production of coloured diamonds," the bidding was very active, the company said, and most of the lots were sold for well above their starting price.

The “hero stones” – stars of the collection with a particularly rare combination of qualities, generated enormous interest from bidders. One such “star”, which attracted a lot of attention from buyers around the world was an oval cut Fancy Vivid Orangy Yellow diamond weighing 15.11 carats (pictured). During the course of the bidding the diamond doubled in price. “The collection of large coloured stones – all cut by our company – which we brought to Hong Kong was the biggest in ALROSA’s history. We sold the lots for well above their starting prices and consider the auction results to be very positive,” said Pavel Vinikhin, Director of the DIAMONDS ALROSA cutting division.

Chinese companies were particularly active in the bidding, ALROSA said in a statement. Nine of them bought 20 large stones between them. Chinese buyers showed special interest in coloured diamonds of one carat and under. These stones were sold in groups, intended for use by jewellery manufacturers.
During the auction, more than 100 participants from around the world were active on ALROSA’s own electronic trading platform. It is noteworthy that Typhoon Manghout, which swept through the city during the Hong Kong Gem & Jewelry Fair, affected the auction results: many clients were unable to get to Hong Kong and view the lots at the Fair or in the company’s office. ALROSA therefore plans to hold an additional auction in the near future. “We also plan to hold the “True Colours” auction on a regular basis – once or twice a year," said Mr. Vinikhin. "The results of the bidding clearly show that we have successfully taken another significant step towards our goal of becoming the world leader in the production of coloured diamonds.”