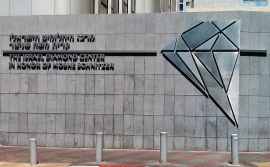 The Israel Diamond Exchange (IDE) has appointed Eran Zini as its new Managing Director. After having served as senior advisor to Israel’s Minister of Justice, he joined Israeli pioneering electric car start-up Better Place, as head of government relations and regulation. He then joined a government company devoted to vocational rehabilitation for people with disabilities as head of operations, and a year later was promoted to Managing Director, a position he held until he was recruited by IDE.

Zini fills the vacancy left behind by Eli Avidar, who stepped down in April.