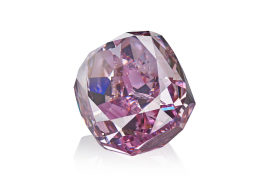 Russian diamond mining giant ALROSA is planning to showcase a unique collection of large, fancy-colored diamonds at the Hong Kong Gem & Jewelry Fair in September, reports Rough & Polished. The collection of diamonds the miner will showcase includes 250 stones of different shapes and colors (including very rare colors) - purple, pink, orange and vivid-yellow - and is said to be the largest collection of fancy-colored stones the company has ever presesnted.

According to the Gemological Institute of America (GIA), which certified all of the diamonds, the headline diamond - an 11-carat, deep purple-pink cushion-cut diamond - is the biggest stone of its color grade that has ever been submitted to the institute for grading. Other “stars” of the collection include an orange-yellow diamond weighing more than 15 ct and an 11-carat vivid-yellow cushion-cut diamond.

“The process of creating the collection took us more than a year," said ALROSA’s Deputy CEO Yuri Okoemov. "We believe that the craftsmen of ‘Brillianti ALROSA’ managed to create real masterpieces in polishing art and we are ready to show the world the examples of so-called ‘Russian cut’ which is characterized by the superior quality of work and strict requirements for meeting the standards. This collection will prove once again that ALROSA has great potential in the fancy diamond market." The stones presented at the show in Hong Kong will then be sold during the auction “True Colours” (ALROSA’s fancy diamond tender) via the company’s digital platform. Since 2018 ALROSA distinguishes 19 color groups of diamonds.

The showcase fits into ALROSA's plan, announced in May this year, to boost revenue from selling rare, colored stones where demand is stable, according to the head of ALROSA's sales division Evgeny Agureev. The global market for polished colored diamonds is now dominated by Rio Tinto and De Beers, but apparently ALROSA aims to makes some changes to its sorting and processing in order to compete. “We hope that ... ALROSA will become one of the global leaders in sales of polished colored diamonds,” Agureev said, adding that the stones would come straight from the producer, ensuring “transparent origin” in an industry that has been working hard to prevent stones that have been mined in areas that could fuel conflict from reaching the market.