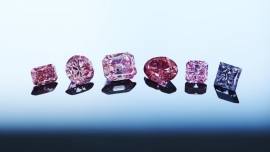 Rio Tinto's Arglye mine in Australia - the world's main if not only source of pink diamonds - may be heading for closure in 2020, but not before going out with a bang. The miner will headline one of its last ever pink diamond tenders with the Argyle Alpha vivid pink diamond, weighing 3.14 carats, which was actually uncovered in 2015. It the largest stone of its color in the history of the annual sales event. The emerald-cut Alpha (pictured above, third from left) is one of 63 rare pink, red and violet diamonds - weighing a combined 51.48 carats - featuring in this year’s Argyle Pink Diamonds Tender. The 3.14-carat stone is part of a collection of six “hero” diamonds the miner will offer at the sale, with prices expected to run to nearly $100 million for the entire lot. Before it was cut, the Alpha vivid pink diamond weighed 5.88 carats.

“Rio Tinto’s Argyle mine is the world’s only source of these highly coveted pink, red and violet diamonds, and we expect considerable interest in this year’s collection,” Rio Tinto CEO Jean-Sébastien Jacques said Thursday. “The combination of strong demand and extremely limited world supply continues to support significant value appreciation for Argyle pink diamonds.” This year’s tender, which the company has called Magnificent Argyle, also includes the Argyle Muse, an oval-cut, 2.28-carat stone, which is the largest purplish-red diamond ever offered at the tender, and came from a 7.39-carat rough. A second diamond, cut from the same stone, will also be up for sale. The other hero diamonds include the square-radiant-shaped, 1.29-carat, fancy vivid purplish-pink Argyle Maestro; the princess-shaped, 1.57-carat, fancy dark grey-violet Argyle Alchemy; the Argyle Odyssey, a round brilliant, fancy intense pink stone weighing 2.08 carats; and the radiant-shaped Argyle Mira, a 1.12-carat fancy red.

The largest ever pink diamond recovered from the Argyle mine, the Pink Jubilee, weighed 12.76 carats. Although Rio Tinto has not set a price on Alpha, the record price achieved for a pink diamond was $US2.2 million per carat, potentially valuing Alpha at around $US7.9 million ($10.7 million). The most expensive gem ever sold at auction was the 59.6 carat Pink Star diamond, sold for $US71.2 million last year. The buyers are typically the super-wealthy, or luxury jewellery businesses from around the world. They are allowed to bid by invite only.