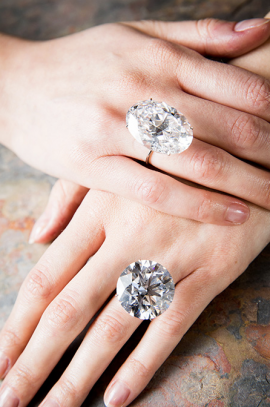 Sotheby's Magnificent Jewels and Noble Jewels auction to be held in Geneva on 15 May will feature some remarkable diamonds, most notably two large D flawless diamonds, each weighing over 50 carats, and the historic and highly important Farnese Blue, a Fancy Dark Grey-Blue diamond weighing 6.16 carats. Both of the diamonds belong to the highly rarefied sub-category of Type IIa diamonds, which make up just 2% of gem diamonds and boast the highest optical transparency. The first of the big stones is a 51.71-carat round, brilliant cut diamond, carries an anticipated price of $8.2 - 9.5 million; the second, similarly perfect, weighs 50.39 carats but is oval and has $7.3 million to $8 million estimate. They are both the second largest D Flawless diamond of their shape ever to have come to auction.

As Sotheby's notes, for diamonds of such significant size, diamond cutters will generally try to keep the maximum weight from the rough. For this reason, they typically create elongated cushions, emerald-cuts, and pear-shapes. In this case, however, the master craftsmen who cut the stones have chosen round brilliant and oval cuts respectively, which show off the diamonds’ exceptional physical characteristics to maximum effect. Looking ahead to the Geneva sale, David Bennett, Worldwide Chairman of Sotheby’s International Jewellery Division, commented, “Having witnessed the enormous effect of the 102.34 carat stone on those who saw it, we are now thrilled to bring to the market two more truly exceptional stones, both of which are among the largest, highest quality white diamonds ever to come to auction. Diamonds like these have always captivated collectors and connoisseurs alike and continue to do so today.”

At the same auction, Sotheby's will put the historic Farnese Blue under the hammer. The stone was given by the Philippines to Elisabeth Farnese (1692–1766) Queen of Spain, by marriage to King Philip V (1683–1746). This will be the first time the exceptional stone has ever appeared on the market, after having remained in the same family for over three centuries. The blue stone carries an estimate of $3.7 to $5.3 million.