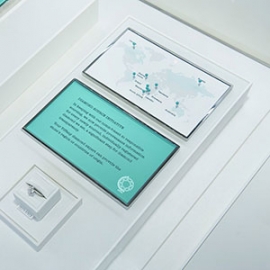 Tiffany & Co. has announced that, effective immediately, it will begin sharing with consumers the provenance (country of origin) of its diamonds weighing 0.18 cts. and up. This "Diamond Source Initiative", which Tiffany's calls "a significant step for diamond transparency," will go further than current industry standards, and responds to increasing consumer demand to know they are making responsible purchases. Tiffany will trace each of its diamonds using a unique “T&Co” serial number etched into the stones by laser. This serial number will include information about that particular stone's geographic sourcing information, and will be included in the company’s in-house grading reports. This information will also be shown (see photo) in some of its "Love & Engagement" ring display cases, or will be shared by its staff. Starting in 2020, Tiffany will also begin disclosing the "craftsmanship journey" (i.e., where they are cut and polished) of its diamonds as well as the provenance of the rough stones.

With this move, Tiffany says it is "committing to 100% geographic transparency for every newly sourced, individually registered diamond, and will not source any diamonds with unknown provenance (even if responsible sourcing is assured) moving forward." The only exceptions will be diamonds acquired before this program was launched, which they will call Tiffany Heritage diamonds.This initiative will move Tiffany's transparency standards "beyond general assurances of 'conflict free',” as the company says it believes that "knowing provenance is critical to ensuring its diamonds are among the most responsibly sourced in the world." Its implementation will take Tiffany's transparency efforts beyond the Kimberley Process Certification requirements for rough diamonds and, for polished stones, mandate compliance with Tiffany’s Diamond Source Warranty Protocol, which confirms that its diamonds are not burdened with human-rights concerns.

The Diamond Source Initiative makes an exception for "one trusted supplier" (i.e., De Beers) which "has several responsibly managed operations." As De Beers does not separate its diamonds according to their country of origin, De Beers-mined stones will be designated as coming from the “Botswana sort.” Tiffany's explains that the majority of these 'Botswana sort' diamonds are mined in Botswana, as well as in select mines in Namibia, South Africa, or Canada. They are procured from De Beers as an aggregated parcel of rough diamonds. De Beers only recently changed its previous policy to allow clients to identify diamonds issuing from its mines, though not the specific country.

Between 80% and 90% of Tiffany's polished diamonds (over 0.18 carats) are acquired and manufactured through its Antwerp-based subsidiary, Laurelton Diamonds, which sources stones mined by De Beers as well as Alrosa (Russia), Dominion Diamond Mines (Canada) and Rio Tinto (Australia). Laurelton has manufacturing operations in Belgium, Botswana, Mauritius, Vietnam and Cambodia. The other 10% to 20% of Tiffany's diamonds come from "trusted suppliers of polished diamonds have complied with Tiffany’s Diamond Source Warranty Protocol." Concerning the “craftsmanship journey,” which is expected start in 2020 and will include information about where their diamonds are cut and polished, Tiffany says it is unique among global luxury jewelers in that it owns and operates its own diamond polishing workshops around the world, employing more than 1,500 artisans. There should be nothing opaque about Tiffany diamonds,” said Alessandro Bogliolo, chief executive officer, Tiffany & Co. “Our clients want and deserve to know where their most valuable, most cherished diamond jewelry is from, and how it came to be.”