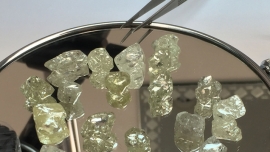 The GIA (Gemological Institute of America) announced yesterday that ALROSA, the world's largest producer of rough diamonds, will participate in the Institute's M2M (Mines to Market) program, its "new digital storytelling platform". GIA's M2M is a digital platform that brings together the Institute's unique ability to scientifically match rough diamonds to the resulting polished gems with information from each step in the value chain, enabling it to tell the compelling story of a diamond's journey. Having completed an earlier pilot phase of the program, GIA has processed thousands of rough diamonds ranging from one carat up to more than 100 carats.

"The M2M program is a way to share with the consumer the story of our diamonds," said Sergey Ivanov, CEO of ALROSA. "The creation of tracing systems is an important step in confirming diamond provenance, which will have benefits for industry participants, retailers and ultimately retail consumers. ALROSA is examining different tracing solutions available on the market to provide consumers with supreme confidence and knowledge." Consumers are exhibiting greater interest in the origin of the diamonds they purchase, ALROSA adds. The M2M program allows the retailer, and ultimately the consumer, to trace the journey of a diamond, adding to its story at each point along the value chain. The M2M program allows for the individual characteristics of a polished stone, and its unique journey, to be shared with consumers using a mobile application, together with traditional diamond grading reports. "Dozens of retailers and several manufacturers are signed up, and we continue to engage other diamond producers as part of the initiative," said Tom Moses, GIA executive vice president and chief laboratory and research officer.

Participating in GIA's M2M track & trace program is a move consistent with ALROSA's new commitment to transparency. ALROSA is a traditional company in a traditional business, and still evokes the reputation of a state-owned giant despite the partial privatization (currently 34%) of the company a few years ago. However, to anyone paying attention, there has been a palpable change in the style and scope of the company’s communications this past year, which more than fully embrace the requirements for a publically-traded company. Senior industry analyst at GIA in Carlsbad, Russel Shor, details the transformation of ALROSA's engagement with the external world in an article published last week, and it became apparent to from The Diamond Loupe's discussion with CEO Ivanov last February that this shift toward a policy of openness started at the top.

Shor points to ALROSA's auction in Hong Kong of polished fancy colored diamonds as the latest sign, "that this once-aloof diamond producer is asserting itself into the world diamond market." ALROSA publicized the sale well in advance, and "took the unusual step of inviting members of the trade and media to view its colored diamond collection in a meeting room in a floor above the show. In the past, it kept sales low key, inviting mainly its own clients to bid on rough and polished diamonds without outside publicity." The Russian giant has also signaled that it plans to become more involved in diamond marketing in the future - its own as well as for the wider industry. "For many years," writes Shor, "Alrosa was a passive, though major, seller of rough diamonds. Like De Beers, it sold its rough through a network of selected clients (Alrosa Alliance) in a series of 10 sales each year, but did little to stimulate demand downstream. The company rarely participated in or contributed to industry marketing initiatives until three years ago when it joined the Diamond Producers Association (DPA). Alrosa only began to contribute in a big way to the DPA last year when it kicked in $25 million, more than one-third of the group’s total marketing budget of $70 million."