Kimberley Process Working to "Remain fit for purpose” Amid Challenges 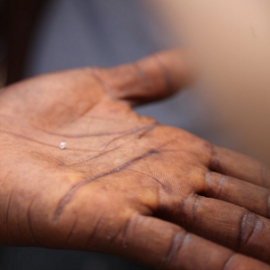 "In recent years the diamond industry has been battered by falling prices and the growing threat from synthetic, lab-grown stones", writes Jon Yeomans for The Telegraph. "But it is alert to the problems in its supply chain and the reputational threat these hold. At last year’s plenary in Brisbane, the Kimberley Process itself agreed to look seriously at changing its definition of conflict diamonds and how its rules are enforced." In an article examining the origins of the KP - a scheme designed to certify that diamonds are “conflict-free” - as well as its successes and recent difficulties, the author pinpoints the issues that have the organization looking to reform itself. With the European Union at the helm as 2018 Chair, they hope to achieve precisely that.

In her opening letter, Hilde Hardeman, the EU representative, says 2018 will be a “crucial year for the Kimberley Process” as it works towards ensuring that it “remains fit for purpose”. Likewise, Stephane Fischler, acting president of the World Diamond Council, which represents the industry, is backing reform. “We need to broaden scope of the Kimberley Process.” He backs calls to establish a full-time secretariat for the KPCS, which would “professionalise” the body, and introduce more rigour to the peer-review system, whereby countries scrutinise each other’s adherence to the regulations. Still, he admits that the structures of the KP, as well as the fact that decisions require unanimity, rather than a majority vote, can be “frustrating”. Nonetheless, he tells Yeomans that a “serious outline” of how the KPCS will change – including its approach to artisanal mining – should be ready by the end of 2018.

Still, the KP has an uphill battle. As Yeomans points out, given the expansive nature of the industry, "many argue that a point-of-origin certification scheme simply can’t be made to work. Few industries," he notes, 'if any, can guarantee the audit trail of goods. The fundamental problem with diamonds is their high value-to-weight ratio: few other items on the planet are worth so much yet are so small and easy to transport." This results in both the motivation to and ease of smuggling, with digital tools hightening the smugglers' game, as a report from Global Witness published earlier this year points out. Michael Gibb of Global Witness told him, “The Kimberley Process was a tremendous achievement and continues to do important work. But it can’t deal with all these issues by itself.” Kieron Hodgson, a diamond industry analyst at Panmure Gordon, agrees: “In its day the Kimberley Process was brilliant, but it has fallen behind what is relevant for consumers and retailers, as well as producers and investors.”

The $80bn (£57bn) a year diamond jewellery business is no different to other luxury markets such as watches or iPhones, Hodgson adds. “If they are not abiding by the highest ethical framework, from a retailer’s perspective, you’re at risk. Ultimately, you’ve got to give consumers what they want. And no one wants to buy a stone that was sourced by child labour.” This is a danger raised by Ian Smillie, founder of the Diamond Development Initiative, which is dedicated to improving standards for artisanal miners at the bottom end of the supply chain, whom he feels are ignored by the Kimberley Process. “These alluvial diamonds are very close to surface and scattered over many hundreds of square miles. They are an obvious source of income for very poor people: all they need is a shovel and a strong back.” The fact that the KP has not yet developed the versatility to handle every situation has led some civil society groups to withdraw from the scheme altogether. But the organization is not anywhere near admitting defeat. The use of new technology, Yeomans points out, could play a big part in the future of certification, with De Beers pursuing a scheme that might adopt blockchain, to track diamonds. “That’s to their credit,” says Hodgson. “They’re not just sitting there waiting for the Kimberley Process to say ‘maybe we should do this’.” Fischler, meanwhile, issues a challenge to the groups that have quit the process: “Yes, it’s difficult, but what is the alternative? Let’s not forget this is a governmental process with 81 countries. I don’t think walking away is a solution. We have an obligation to stay.”