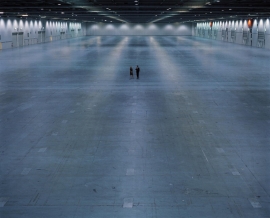 Four years ago, I wrote an article on The Diamond Loupe entitled: “Greetings from Underworld – Baselworld 2016 meets (modest) expectations”, a title that left little to the imagination. At that time, like many others, I was frustrated with having to spend astronomical amounts of money on lodgings (for lack of a better word) on a boat, coffees and sandwiches with price tags that would make one think they were made of gold and diamonds, all the while witnessing first-hand how our Antwerp diamond companies, alongside many others, were stuffed in overpriced, ugly booths in a hall that was basically a shabby basement, ill-signaled, across the street from BaselWorld’s grand and dazzling halls.

For those who missed it, the future of BaselWorld currently is highly uncertain after a number of the fair’s most prestigious brands announced they would no longer be part of the show. It looks like many smaller brands and exhibitors are following suit, and the 2021 edition has been officially cancelled. Organizer MCH’s unwillingness to refund down payments for the cancelled 2020 show was the proverbial straw that broke the camel’s back, and that sentiment doesn’t just apply for BaselWorld.

For many years, communication between trade fair organizers and exhibitors has been for the most part top-down and the voice from the exhibitor side remained largely unheard. Steep increases of fees year after year turned participation at trade fairs into a very costly affair. At the same time, the strength of the once powerful business model of trade fairs started to erode, caused by a multitude of disruptive forces and challenges. Global demand for diamond jewelry has been under severe pressure for several years now and the typical buying moments are no longer a mantra in an interconnected, globalized market where you can have a diamond shipped to the far corners of the world in barely 48 hours. As one trader told me a couple of months ago; “In the glory days, I would have one large shipment for one customer. Today, I have 70 clients and 70 small shipments to get to the same amount of money.” The quality of foot traffic decreased, and trade fair organizers were seemingly unable or unwilling – or both - to provide an answer to these challenges.

In Antwerp, where we used to have long waiting lists for companies to join the Antwerp Diamond Pavilions at the major diamond and jewelry trade fairs, interest to participate has dropped dramatically over the past two-three years. When asked, traders always bring up the same reason; too high investment cost for little to no returns. And that was before the global COVID-19 crisis broke out.

This pandemic not only makes it impossible for buyers and suppliers to travel, let alone gather in 9 square meter booths, it is a catalyst for two major changes in the way we do business.

First, the diamond industry, much more than other industries, is traditionally one where personal, face to face relationships are essential. Buyers and sellers want to see and feel a stone, and a personal relationship with their counterparts fosters mutual trust. In the past decade, digital sales and communication technologies have slowly found their way into this business model, and global lockdowns have now accelerated a true digital revolution; online trading platforms are gaining a lot of traction, as well as innovative solutions for visualizing stones, digital communications channels, and so on. Never before have more people engaged into the virtual world, and in the so-called “new normal”, these new ways of connecting and doing business are going to last.

Secondly, this crisis of unprecedented scale has brought back unity in an industry that, over the years, became more and more fragmented. When times are tough, people tend to set aside conflicting interests and come together and that is exactly what has been happening in the global diamond industry over the past two months. If you browse through the industry news the headlines are clear: “Traders are uniting in an “industry-led” digital trading platform” “Young Diamantaires establish member platform”, “Luxury brands unite in revolt against trade show organizer”, “Trade body calls for import ban”. Regardless of whether or not these decisions and actions are the right ones, it is clear the industry is shaking off a “prisoners dilemma” mindset and is realizing that together, they are much more powerful than they are alone.

In the past few weeks and months, for the first time in my ten years at the Antwerp World Diamond Centre, trade fair organizers have shown a real interest to engage in dialogue with the people – or those representing them – who have been the foundation of their success, and revenues, for decades. Part of the reason why they were so keen to reconnect undoubtedly was to learn more about the Online Diamond Show we launched several weeks back. The show, which inadvertently took place at the very peak of the COVID-19 crisis, was a success, not necessarily in terms of generating sales – trade had come to a near complete standstill – but moreover as it demonstrated that, in a relatively short amount of time, people could pull together and create an alternative approach to do business. Similarly, in the past three years, the AWDC has set up a series of Antwerp Diamond Experiences, a three-day networking trip where a selection of foreign, potential customers were introduced to an equally targeted selection of Antwerp companies, in a concept that combines Antwerp's famous diamond heritage with education and solid business opportunities. Companies who fit the criteria and participate have to invest but a fraction of what they would invest in a trade fair participation - somewhere along the lines of a BaselWorld lunch...

The point being, for trade fair organizers, the current crisis is the ultimate wake up call, to finally listen to what their exhibitors have been saying to them for a number of years now, to rethink their business model, to reinvent themselves and create added value for all parties involved; organizers, visitors and exhibitors.

Last but not least, when talking to our traders, the majority of them still feel that opportunities to meet with potential and existing customers face to face is an added value. That should encourage organizers in the sense that the trade fair model doesn’t have to die. But above all, these opportunities need to be targeted, affordable and embedded in an approach that is adapted to the “new normal”.

Karen Rentmeesters is Senior Manager PR&Communications with a special focus on Industry Relations at the Antwerp World Diamond Centre.