What's in a Name? Paul Zimnisky on Terminology & the Perception of Synthetic Diamonds 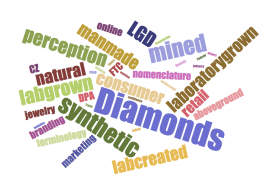 The issue of terminology concerning laboratory-grown diamonds has in recent years been a subject of significant debate, deliberation, conflicting guidelines and warnings issued. Two distinct guidelines have been established in the past two years: The Jewelry Guides by the United States' Federal Trade Commission (FTC), and the Diamond Terminology Guideline developed by nine leading diamond industry organisations outside the U.S., which is built on two internationally accepted standards: the ISO 18323 Standard (“Jewellery – Consumer confidence in the diamond industry”) and the CIBJO (World Jewellery Confederation) Diamond Blue Book.

The FTC has been strict about preventing marketers from veering too far from its list of approved terms: laboratory-grown, laboratory-created, and [company]-created; synthetic was previously on the FTC list, and is still among the recommended terms of the international guidelines, which also caution against using abbreviations such as “lab-grown” and “lab-created”, and informs the industry not use the terms “cultured diamonds” and “cultivated diamonds”. Despite the lack of leeway the FTC has allowed, common usage of one term or another may eventually rule the day. In his most recent article, indpendent analyst Paul Zimnisky argues that the eventual acceptance of one descriptor or another will have an impact on the way synthetic diamonds are perceived, and ultimately on their commercial success or failure. Republished in full from Paul Zimnisky's Diamond Analytics with the analyst's generous permission.

What We Call Man-made Diamonds Could Ultimately Determine Their Success

When Signet jewelers’ (NYSE: SIG) e-commerce subsidiary James Allen began offering man-made diamonds in May, the company added an additional search tab to the site: “Earth-created diamonds” or “Lab-created Diamonds.” Up until this point, websites offering both products typically defaulted to natural diamonds or simply “diamonds” providing a further filter required to search for the man-made variety.

While this seems somewhat trivial, it highlights the fact that the industry is still undecided in how to present diamonds to consumers following the wider-scale emergence of man-made stones in recent years. Given the wide variation of terms already used by the trade to describe man-made diamonds, adding an “earth-created” qualifier to natural diamonds seems like further convolution at a time when diamond customers are already understandably confused.

These days when a consumer researches what is often times a multi-thousand-dollar diamond purchase they are faced with multiple terms to describe multiple different products, whether it a natural stone, a man-made, a simulant or some other altered version or hybrid. From a marketing standpoint it is understandable why the industry is jockeying with terms to describe these products because it will likely impact a consumer’s perception (see list of common names here).

With regard to man-made diamonds, the industry prefers the term “lab” to be included in the descriptor because it evokes a perception of innovation and technological advancement. However, while man-made diamonds do represent these nouns to an extent, most are not technically produced in a “lab,” but rather a manufacturing facility or a factory. Only the research and development typically takes place in a laboratory setting.

“Synthetic” was the ubiquitous term used to describe the product prior to 2017. Given that man has been commercially making diamonds for over a half of a century, largely for industrial application, the term was similarly applied to gem-quality versions when the product began emerging in greater scale in recent years. “Synthetic” tends to be the preferred term by the mining industry given the potentially pejorative association when speaking of a luxury product.

Interestingly, while the U.S.’s Federal Trade Commission removed the word synthetic from its recommended descriptors of man-made diamonds in July 2018, in May 2019, when the Trade Representative, another U.S. government body, issued a list of products that would be effected by the latest round of trade tariffs with China, the government used the term synthetic to describe man-made diamonds and other gem-stones.

Technically speaking, “man-made” is probably the most appropriate descriptor for the product although the industry has most actively pushed “lab-created” or “lab-grown” given the aforementioned marketing benefit.

Consequently, there also appears to be growing use of the acronym “LGD,” shorthand for lab-grown-diamonds. Given the popularity of acronyms, especially in the social media age, along with many in the industry growing tired of writing out "lab-grown diamond," LGD has been appearing more frequently, at least in trade communication.

Again, as trivial as this may sound, if LGD becomes the standard moniker of man-made diamonds it could actually have significant implications. By using LGD, the word “diamond” is literally removed from the description. Further, given consumer familiarity with CZ, the acronym for cubic zirconia, a diamond simulant, consumers may subconsciously relate an acronym for a diamond product to be a diamond simulant even though in the case of man-made diamonds, the product is chemically diamond. This could erode the perceived value and desirability of the product as a luxury item in consumers eyes.

Widely-available, high-quality man-made diamonds are still a relatively new product, representing only a single-digit percentage of the global diamond jewelry market, so the parlance remains up for grabs. There are still consumers that do not even know that man-made diamonds exist, and many of the ones that do may still not be exactly sure what they are.

Given how important marketing and consumer phycology is to a luxury product, and especially in the case of diamonds given the high emotional-value component, the term that becomes the standard to describe man-made diamonds could have a significant impact on the success of the product longer-term.