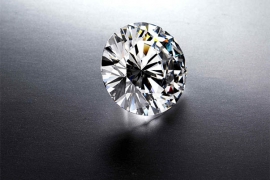 Grant Mobley, a gemologist and director at Pluczenik gave Harper's Bazaar a primer concerning the distinctiveness of diamonds as compared to laboratory-grown products. The foremost point of differentiation is their value - and specifically, the inherent value which results from the sheer improbability of their formation one hundred miles below earth's surface up to three billion years ago, and the extraordinary environmental circumstances they undergo - making their way towards the earth's surface through volcanic eruptions - before they can be mined. "Quite simply, they are miracles of nature", he says. "The formation of a diamond is one of the attributes that makes them so distinct and rare." This is a far cry from the production process of synthetic diamonds, he emphasize: "As for laboratory-grown diamonds, the process is less miraculous," and he goes on to describe how they are grown in a matter of weeks.

Explaining why laboratory-grown stones have no inherent value, he specfies two reasons: "First, there is not a sufficient history of laboratory-grown diamonds to determine what consumers are willing to consistently pay for them, although they are often marketed and priced comparable to a real diamond. However, since laboratory-grown diamonds have a very low production cost, the sellers convince buyers it is a purchasing option that is just as good. The second reason is that laboratory-grown diamond production will continue to get cheaper and cheaper as competition from factories in China grows, forcing producers to keep lowering their sales price for these stones." He adds that while synthetics have little true value, they are, "only slightly cheaper" to purchase in a store.

On the inherent value of diamonds, Mobley explains, "Diamonds are a finite natural resource. There can only be a certain number in existence and once they are all found, that is it. On top of that, the vast majority of diamonds found are not gem quality. This rarity is why real diamonds have significant inherent value, which will continue to increase as the number of diamonds naturally available gets lower and lower." But, he says, issue of monetary value is not the most important distinction, citing what they represent and what they have represented for hundreds of years. "It is because of a diamond's uniqueness, strength, and hardiness that they have come to be the ultimate representation of love, commitment, and success." He also points out the fact that the diamond mining industry is actively involved with and supporting upwards of 10 million people globally. Mobley believes people need to be educated about the distinctiveness of diamonds, calling on jewelers to make a clear distinction for their customers, and also points out the need for them to have diamond detection devices: "These devices will soon become a must-have in retail stores all over the world and the detection will continue to become easier and easier as technology advances."