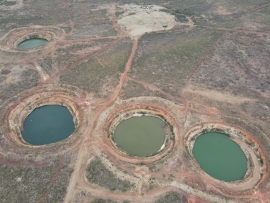 Lucapa Diamond Company, already operating mines in Angola (Lulo) and Lesotho (Mothae) has finalized the acquisition of the Northern Territory (Australia) Merlin Diamond Project through its subsidiary Australian Natural Diamonds. The Merlin mineral lease contains 11 discovered kimberlite pipes in three clusters as well as two known kimberlites and more area's of interest, and the company is in the last stage of finishing a scoping study that aims to support the potential of the project, which is estimated at 4m cts. The Merlin diamond mine was operational during a brief period between 2000 and 2003, producing 507,000cts of rough diamonds, including some of exceptional quality and the mine holds the record for the largest rough diamond produced in the country (104ct Type IIa).

“The successful development of Merlin will be transformative for Lucapa as the delivery of the Company’s third producing mine will expand our production base and revenues considerably elevating Lucapa into a mid-tier diamond producer,” Stephen Wetherall, MD at Lucapa Diamonds said.