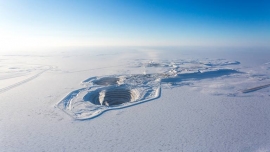 Rio Tinto announced it became the sole owner of the Diavik Diamond Mine in Canada. The company owned and operated 60% of the mine - as the other 40% was owned by Dominion Diamond Mines - but now a transaction has been completed for Rio Tinto’s acquisition of the share held by Dominion.

Under the terms of the transaction, Rio Tinto has acquired all remaining Diavik assets held by Dominion, including unsold Diavik production and cash collateral held as security for Diavik’s future closure costs. In return, Rio Tinto released Dominion and its lenders from all outstanding liabilities and obligations to fund the joint venture’s operations and closure, expected in 2025.

Rio Tinto Minerals CEO Sinead Kaufman: “Diavik will now move forward with certainty to continue supplying customers with high quality, responsibly sourced Canadian diamonds and making a significant contribution to the Northwest Territories of Canada and local communities. As owner and operator, Rio Tinto is committed to delivering Diavik’s eventual closure safely and responsibly, to leave a positive legacy in consultation with our community and government partners.”

Rio Tinto has operated Diavik since production commenced in 2003. The mine employs more than 1,100 employees. In 2020, it produced 6.2 million carats of rough diamonds.