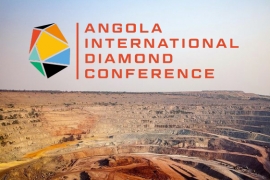 Angola's Minister of Mineral Resources, Petroleum and Gas (MIREMPET), Diamantino Azevedo, has announced it will organize its first International Diamond Conference (AIDC) in the recently inaugurated Saurimo Diamond Development Hub, where a wide variety of industry related activities, including local polishing factories are settling in. The goal of the conference, which according to a press release will be attended by several mining ministers, captains of industry and leading experts from within the global diamond industry, is to support the country's diversification policy and attract businessmen and potential investors. More information will be available shortly via www.mirempet.gov.ao