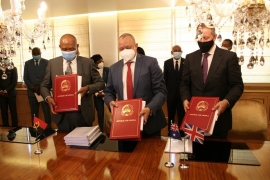 The Angolan Ministry of Mines, Minister Azevedo, has announced it has finally signed a deal with Rio Tinto, after months of negotiations, for the exploration of the 108 square km Chiri (kimberlite) diamond concession in the Lunda Norte region of the country. In the initial phase, Rio Tinto Angola has a 75% stake, Endiama a 25% stake, in addition to the establishment of a joint venture. The Chiri concession had previously been in the hands of Isabel dos Santos up until President Lourenço, opened up the licenses to foreign investors when he took office in 2018. Rio Tinto, one of the largest mining conglomerates in the world and marketing its diamonds via its Antwerp Rio Tinto Diamonds branch, currently only produces diamonds at the Canadian Diavik mine, and has been on the lookout for new projects. “Rio Tinto confirms that it has formed an exploration joint venture with Endiama, the national diamond mining company of Angola, to evaluate the Chiri kimberlite in the Lunda Sul Province of Angola, approximately 30km north of Saurimo. Rio Tinto will be the majority partner and will manage and operate all phases of the work to international standards. The JV will embark on a staged programme of evaluation that will take a minimum of five years to determine if the project will progress to development.”, a Rio Tinto Spokesperson added.