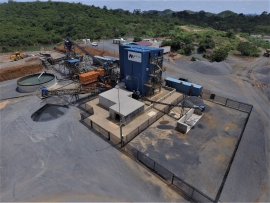 Meya Mining (Meya), owner of a large, 129 square km kimberlite-rich concession in the eastern region of Sierra Leone, has announced a financial and commercial partnership deal with Antwerp-based Samir Gems and Taché Company. In 2017, just 7 days after commissioning its plant, the miner recovered a 476 carat diamond called the Meya Prosperity. At the time, the Meya Prosperity was the 30th largest diamond ever discovered across the globe and one of five within this top 30 discovered in Sierra Leone.

In the deal, Samir Gems & Taché, forming a Partnership, will fund the development of Meya’s transition into commercial production targeting a minimum of 30,000 carats per month.  In return, the Partnership has been granted the distribution rights to Meya’s Run of Mine production as well as downstream collaboration on exceptional stones. The collaboration brings together the expertise of mining, rough tendering and trading as well as high-end manufacturing and polished trading. “Meya is confident in the Partnership’s strengths and expertise, as 3rd and 4th generation family businesses within the diamond sector alongside their extensive experience in dealing with exceptional diamonds such as the, 342 carat Queen of Kalahari, 910 carat Lesotho Legend, 439 carat Letseng Icon and the 29 carat Rose of KAO. Both parties are committed and very excited about the endless possibilities that this journey could engender.”, the partners commented in a joint press release. A first tender of Meya goods is scheduled for next week.