A New Chapter For Diamond Mining in Australia? 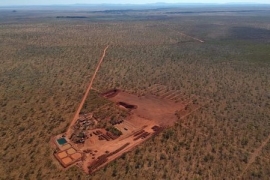 While to outsiders it may have seemed the closure of Rio Tinto’s Argyle mine marked the end of diamond mining in Australia, recent developments show signs of an unexpected revival. Earlier this year, Australian-based miner Lucapa, currently operating mines in Angola and Lesotho, acquired the Merlin mine, which hasn’t produced any diamonds since 2003. Lucapa hopes to restart the mine within two years. Meanwhile, in Western Australia’s Kimberley region, two companies are looking to revive the Ellendale mine, with India Bore Diamond Holdings, who sent a batch of diamonds to Antwerp for valuation last year, now closing in on state government approval to start small-scale commercial mining as early as September, hoping to find the precious fancy yellow diamonds the area is known for. A second company, Burgundy Diamond Mines recently acquired a tenement from Gibb River Diamonds and is reportedly ready to start trial mining shortly.