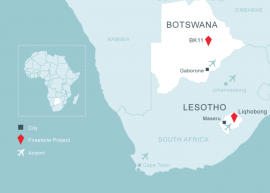 Firestone Diamonds announced it had entered a binding share sales agreement for its Botswana operations. Botswana-owned Visionary Victor Resources will acquire the BK11 mine, as well as Firestone’s 90% interest in its local subsidiary, Monak Ventures, for US$50,000.

Firestone Diamonds has been trying to offload their Botswana asset for nearly six years, as the project has been on care and maintenance since 2012. At that time, the mine plan estimated it still had 1.2 million carats in reserves.

Two previous sales attempts had been made for the operations in Botswana, which in 2014 had was valued at US$10.7 million. In 2015 the miner embarked on a sale to Southstone Minerals, formerly Tango Mining, for US$8 million. Following several delays, the deal fell through when Tango failed to raise the necessary funds. In 2017, the miner tried selling the operation again, this time to a joint venture comprising of Gareth Penny, former De Beers CEO, and the Diacore Diamond Group for US$5.1 million. Following delays, negotiations collapsed when Penny and Diacore decided not to go ahead with the venture.

In addition, Firestone owns the Liqhobong mine in Lesotho, where they own a 75% stake and the Government of Lesotho 25%. The miner decided to put operations in Lesotho on hold in March 2020 when diamond demand collapsed due to the COVID-19 pandemic. The company is currently in talks with lenders to restructure their debt, as they intend to resume operations by the end of the year.