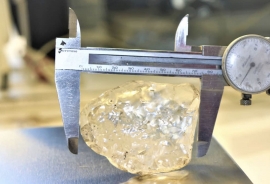 Debswana, the joint venture between the Botswana government and Anglo American’s De Beers unit, announced the recovery of a 1,098-carat diamond. Initial analysis suggests the rough stone could be the world’s third-largest gem-quality diamond ever to be recovered after the 3,100-carat "Cullinan Diamond", was discovered in South Africa in 1905, and the 1,109-carat "Lesedi la Rona", was found in 2015, in the Karowe mine in Botswana.

The diamond, which was discovered earlier this month at Jwaneng, the world’s richest mine by value, "brings hope to a nation in trouble," said Lynette Armstrong, Director of Debswana. It's not clear if the diamond would be sold by De Beers or the Okavango Diamond Co., a state-owned trader that also holds the right to buy Debswana stones. The company has said it will work with the government and De Beers to value and sell the diamond to ensure it returns maximum benefit for the people of Botswana.

Botswana accounts for more than 65% of De Beers’ output, while the country relies on diamonds for 90% of its exports. Due to the COVID-19 pandemic, the nation’s total rough diamond sales fell by 30% to US$2.1 billion last year, as mines were forced to suspend production. Earlier this year the company announced the Jwaneng mine would be undergoing a US$2 billion expansion.