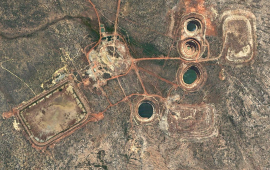 In their latest update, Australia-based miner Lucapa Diamond Company has struck a deal to buy the Northern Territory's Merlin diamond mine for US$17.8 million, which they intend to fund with private and public sales of its shares.

“This is a strategic acquisition for Lucapa which represents a value-accretive and logical step in Lucapa’s production strategy," said Lucapa Managing Director Stephen Wetherall. "The project is well known for being Australia’s large stone producer and is a strong complementary fit with the Company’s two existing niche productions in Africa that are set to produce solid returns for Lucapa in 2021,” he added.

The acquisition complements Lucapa’s existing portfolio, adding a development opportunity for 4.4 million carats, to their two existing producing assets in Angola and Lesotho. The acquisition includes a 24 square km mining lease and a 283 square km exploration tenement. Additionally, the mine comes with all the existing equipment and assets, including the airstrip, access roads, camp, workshop, Tomra XRT sorter, and a range of other items.

A part of the funds, US$15.5 million, is set to come from commitments from several new and existing institutional investors. The company intends to raise an additional US$2.3 million by selling shares to eligible investors in six countries, including Australia, Germany, and Switzerland.

“The success of the Placement element of the capital raising, and the high level of interest received from existing and new institutional investors, demonstrates the quality of our existing assets and the strategic nature of the Merlin Diamond Project acquisition and our future. We look forward to getting on the ground, completing the work to deliver the various studies, and bringing Merlin into production as soon as possible, said Wetherall.”

Mothae and Lulo are set to be in full production for the rest of the year at expanded capacities. Last year, Mothae in Lesotho had been placed on care and maintenance for six months while operations Lulo in Angola were at a reduced capacity due to covid related restrictions. The miner predicts the rough will fetch an average price somewhere between US$957 and US$1,034 this year, compared with US$745 in 2020. The improvement is in large part due to “strong demand and a far more robust diamond market that has emerged from the pandemic returning diamond prices to levels last seen in 2018,” the company said.