Zimnisky: Pandemic Could be Catharsis for Diamond Industry 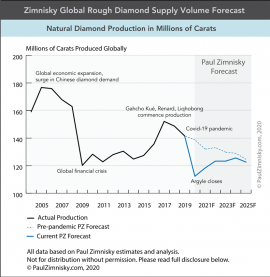 While the pandemic brought about an unprecedented shock to the whole diamond value chain in 2020, in a way it may also have acted as a catharsis of sorts for an industry that has been struggling to regain footing in recent years, in part due to a misalignment of supply and demand.

End-consumer diamond demand has been somewhat volatile in recent years, but for the most part it has been relatively resilient. However, on the supply side, a trend of increasing output has been apparent since rough prices hit an all-time high in 2011. Excess diamond supply held by both the miners and the mid-stream, i.e. the manufacturers, has in part limited diamond price appreciation for most of the decade and thus has limited profitability for many industry players. For instance, a global basket of publicly traded diamond miners weighed by modified market cap in U.S. dollars, is down in excess of 60% over the last five years.

That said, challenging economics for the diamond mining industry has noticeably reduced exploration activity and new mine development over this time, which will undoubtedly limit new supply in the years ahead. Similarly, diamond and jewelry manufacturers, many of which have experienced apathetic business economics in recent years have transitioned to less levered and more efficient business models or exited the industry all together.

This shift in trend of lower mine output and more conservative business practices by the mid-stream has been accelerated by the pandemic. Multiple mines in the world’s most prominent diamond mining jurisdictions suspended production in 2020 due to government mandated lockdowns and also due to the subsequent market impact on business conditions. For context, six large-scale commercial mines globally have yet to recommence production following operation suspensions in March, April and May related to the pandemic. Consequently, global natural diamond production volume is forecasted to decrease by a significant 20% year-over-year to what is estimated to be the lowest output since the 1990’s (see image here).

Supply has also been impacted in the mid-stream segment of the industry as many manufacturers have been limited by international travel restrictions inhibiting their ability to buy rough at primary trade hubs such as Antwerp, Dubai and South Africa. In addition, following the onset of the pandemic, Indian diamond manufacturing trade organizations called for a voluntary import ban on rough diamonds in an effort to sustain manageable levels of inventory held by the industry, aimed at supporting polished diamond prices and maintaining the creditworthiness of the industry. All-in-all, inventory held by the mid-stream segment of the industry has declined by an estimated 10% year-over-year in U.S. dollars (see image) with stocks now estimated to be at the lowest level since the 2011-12 Indian fiscal year.

Despite the lower output by the mining industry, inventories held by leading miners have consequently accumulated this year due to the limited buying by the manufacturing segment. It is estimated that inventories held by the major miners have increased 25-30% in volume terms this year (see image here). This said, leading producer ALROSA has said that it is “highly likely” that it will sell up to an estimated 30-40% of its inventory value to Russia’s precious stone and metal reserve, the Gokhran, in order to allow the company to offload excess stocks while keeping the supply off of the global market for an extended period of time. ALROSA also recently cut 2021 production guidance which should further provide the company with an opportunity to sell off excess inventory in the coming year.

Over the longer term, end-consumer demand likely remains the most important fundamental factor leading to a prosperous diamond industry –as strong demand ultimately pulls excess supply though the supply chain. That said, in the short- and even medium-term, an oversupplied market can greatly limit the ultimate health of industry –which we have seen in recent years. While the pandemic has undoubtedly shook an already fragile diamond industry vying for a recovery, it also seems to have accelerated a much needed supply shedding that will help position the industry for a more sustained recovery and a return to a much healthier state in the years to come.

Paul Zimnisky, CFA is an independent diamond industry analyst and consultant based in the New York metro area. For regular in-depth analysis of the diamond industry please consider subscribing to his State of the Diamond Market, a leading monthly industry report; an index of previous issues can be found here. Also, listen to the Paul Zimnisky Diamond Analytics Podcast for wide-ranging and interesting discussions with prominent guests from the industry. Paul is a graduate of the University of Maryland's Robert H. Smith School of Business with a B.S. in finance and he is a CFA charterholder. He can be reached at paul@paulzimnisky.com and followed on Twitter @paulzimnisky.

Inventory Change in Value held by Miners and Mid-Stream.png
Visit the website