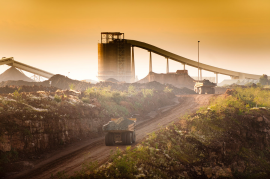 According to Mining Weekly, citing Botswana Central Bank data, exports of rough diamonds in Q3 nosedived to -66%. Debswana, the 50/50 joint venture between miner De Beers and the Government of Botswana, representing the bulk of the country's diamond exports, reported exporting a mere US$287m worth of rough in Q3 2020, compared to US$863m in Q3 2019. Due to COVID-19 restrictions, buyers from global hubs such as Antwerp and Israel were unable to travel to Gaborone, from where De Beers has been selling 90% of is production since it moved operations from London to Botswana in 2016, and the miner allowed its long-term customers to defer purchases, offering maximum flexibility during the pandemic. While in Antwerp, tenders of rough diamonds resumed before summer, De Beers' sales plummeted, as did Botswana's rough exports, apart from other diamond operations such as Lucara Diamonds, which made a partnership deal with HB Antwerp, the Antwerp based manufacturer to take off all rough of 10.8ct+.  According to media reports in May, De Beers did consider temporarily moving the Sights to other hubs like Antwerp, to "move the product closer to its clients", but it wasn't until De Beers significantly lowered prices at the end of August that sales cycles picked up again. Botswana's state finances highly depend on revenues coming from the diamond industry, which some say contribtes 30 - 50% of the nation's budget.