Quebec Renard Mine Said to Reopen 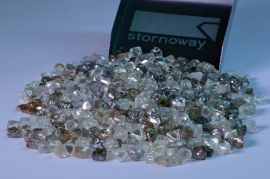 Osisko Gold Royalties, one of the secured creditors which acquired Stornoway's assets and properties a year ago as well as its debts and liabilities yesterday announced the Renard mine operations will resume later this month, after a four-month suspension due to liquidity issues. The restart plan includes a further cost reduction of $30 million and a commitment to boost working capital with another $30 million by shareholders. Stornoway is also expected to bring over 300k carats of unsold rough to the market later this year.