Rio Tinto Will Not Pursue Control of Diavik Mine 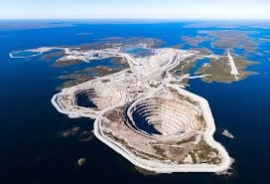 Rio Tinto has ended speculation about a potential move to acquire Dominion Diamond Mines' 40% share in the Diavik mine in Canada's Northwest Territories, which would give the global miner full control of the mine in which it currently owns a 60% stake. According to a May 28 court filing, Rio "does not seek to bid" on Dominion's stake, nor does it intend to acquire Dominion's Ekati mine.

Dominion, owned by the Washington Companies, filed for creditor protection in April, citing disruption to the global diamond trade caused by the novel coronavirus pandemic. In May, Dominion signed a letter of intent with an affiliate of the Washington Companies - which also owns Dominion after paying $1.2 billion in 2017 to acquire the assets - to sell all of Dominion's assets for approximately US$126 million, and has made an agreement for up to US$60 million in short-term financing from Washington. That deal is subject to a court-supervised bidding process. Diavik produced 6.7 million carats in 2019 but is scheduled to close in 2025, with cleanup costs estimated at $365.3 million, according to court documents.

Yesterday, June 16, Dominion filed a lawsuit against Rio Tinto’s subsidiary Diavik Diamond Mines Inc. (DDMI), its associate in the iconic Diavik mine, for alleged breach of contract and acting against the best interests of the partnership. The lawsuit alleges that DDMI has operated the mine in a manner that shows “willful misconduct and gross negligence.” DDMI runs the mine while Dominion makes payments to cover its 40% share of the costs. The partners take their cut of the diamonds produced at Diavik and sell them separately. “DDMI has continued to maintain full operations at the Diavik mine without taking into account the disruptions to the diamond industry caused by the COVID-19 and, in particular, without taking into account Dominion’s circumstances,” the suit alleges. “DDMI has done so knowing that Dominion has no ability to pay for such cash calls because it cannot materially monetize diamond inventories to pay for them,” it notes.

Diamond mines around the world are feeling the same pressures as Dominion, and it may be just the first mining company to find itself on the brink of failure, as Paul Zimnisky, an independent diamond industry analyst based in New York, told CBC News. Already trending downward, rough diamond prices dropped another 10 percent as COVID-19 spread across the globe. Zimnisky last week told the Canadian news outlet that at least eight of the world's 50 major diamond mines remain closed due to the health crisis. "They're in Russia, Africa, Canada. This is not something that's unique to Dominion — or Canada, for that matter," he said. "The most profitable diamond mines will be fine, the weakest may not make it through this, and then there are those in between, maybe on the fringe of profitability.” Overall, he predicts global diamond production will drop 25 percent this year.