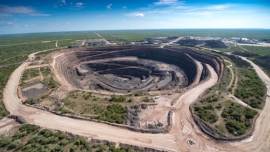 Canadian mining company Lucara Diamonds reports a net loss of $3.2 million in Q1, a result of the continued strain on the diamond mining industry and decreased revenues from sales, despite the fact that operations at Karowé have continued throughout the crisis and production was in line with guidance. In the same period last year, the company achieved a net income of $7.4 million, while cash flow dropped to $2.4 million, compared to $10.6 million in Q1 2019.

Considering the uncertain market conditions, the company will evaluate if and how much cash flow will be spent on the planned Karowe underground expansion, expected to extend the mine's life through to 2040 and bugdeted at $514 million.