Firestone Shutters Mine, Likely for A Year 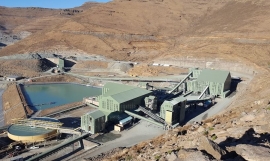 Firestone Diamonds has announced it would shutter its Liqhobong diamond mine in Lesotho likely for "at least" 12 months until the diamond market recovers. The suspension of operations at the mine necessitated by the South African Governmen's directive requiring a 21-day national lockdown in response to the COVID-19 pandemic only added to Firestone's troubles, but the pandemic is starting to take its toll right across southern Africa’s diamond mining sector.

"The impact of the onset of the Coronavirus on the global diamond market has been dramatic and severe," the miner wrote in a statement. "As a result of various country lockdowns around the world (including Belgium and India) with accompanying travel bans, many diamond producers are now unable to physically sell their diamonds presently – this includes Firestone’s subsidiary, Liqhobong Mining Development Company (Pty) Ltd. (LMDC)." Firestone noted that "considerable uncertainty abounds" at this stage regarding three fundamental aspects of LMDC’s business, namely: uncertainty about when they will again be able to sell their diamonds; the price they can expect to achieve, and; the guesswork involved with knowing how long it might take for the diamond market to recover from the coronavirus pandemic.

The company's directors have considered the situation and concluded that "the prudent course of action is not to resume operations at the Mine immediately after the aforementioned lock-downs are lifted and that it is in the best interest of all stakeholders to rather preserve the limited mine life at Liqhobong Mine and the limited cash resources of the Group for as long as possible to ensure the Mine can start up again when the market recovers, which they believe will take at least 12 months."  They added that they have the support of their investors.

Lucapa feeling the pinch in Lesotho as Mothae mine still closed

With the Kingdom of Lesotho landlocked inside South Africa, the measures taken by South Africa to combat the coronavirus made mining operations all but impossible in Lesotho, where Lucapa's Mothae mine is located. The lockdown and self-isolation measures have resulted in many diamond operations across the globe being suspended or curtailed, including at Lucapa's Lulo mine in Angola late in March 2020. As a result of the various restrictions being imposed by countries across the globe in order to prevent the spread of COVID-19, Mothae was unable to market its diamonds through its regular tender channel in Belgium.

Lucapa announced earlier this month, however, that it had sold diamonds from its Mothae mine in Lesotho directly to a ‘high-end diamantaire’ realising $2m in upfront revenue. They said that 3,963 carats have been sold into a cutting & polishing partnership with a high-end diamantaire for US$2.0m (A$3.2m) or US$505 (A$809) per carat. Under the agreement, Mothae will receive the rough price upfront and following accounting for the procurement and diamond manufacturing costs, additional margins generated from the later sale of the diamonds beyond the mine gate will be shared equally between Mothae and the partner.

The company earlier noted that a care & maintenance and security program is being implemented at Mothae in Lesotho to ensure the asset is preserved and well-positioned to recommence mining operations when the global markets recover. Lucapa said it was also seeking finance to help it weather the impact of lost production as a result of lockdown regulations in Lesotho - a move made by Petra Diamonds as well. In ats Lulo mine in Angola, Lucapa, its partners and Lulo management are working with the authorities to re-commence normal mining activities. In addition, Endiama, the state diamond mining company, is exploring viable diamond funding solutions to create liquidity for producers in Angola.