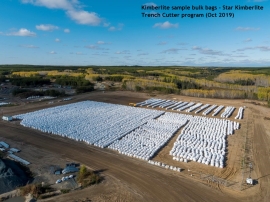 Canadian miner Star Diamond Corporation is taking Rio Tinto Exploration Canada to court over what it claims is a breach of their agreement, excessive costs and a failure by the mining giant to share information. The legal proceedings are related to the June 2017 option to joint venture agreement over the Star-Orion South diamond project in central Saskatchewan. In mid-February, Star Diamond said it notified Rio Tinto Exploration that the latter's purported exercise in November 2019 of its four options did not comply with the agreement, adding that the Rio Tinto unit's operations and claimed expenditures at the Star-Orion South project also failed to comply with the deal. Rio Tinto pans to defend its actions in court.

Star Diamond's filing specifically claims that Rio Tinto had not validly exercised its four options to potentially become a 60 percent partner in the massive diamond venture. Instead, it claims Rio Tinto had used its significant financial resources… “and engaged in bad faith predatory practices …with a view of diluting Star Diamond’s interest in the properties,” according to court records cited by local news outlets in Saskatchewan.

The court document shows, among other legal claims being made by Star Diamond, that Rio Tinto had “failed to prudently manage costs and to appropriately sequence its work.” It says as a result, the costs for 2019 came in at $103 million, which is almost double what Rio Tinto estimated in a presentation to Star Diamond back in 2016. It added that Rio Tinto had only completed one third “of the contemplated work” in this period. Star Diamond said this level of excessive expense, and an estimated $106 million in anticipated costs for the upcoming phase of work in 2020, would leave it having to pay a much larger share of the expenses than expected, “funds that Rio Tinto knows Star Diamond does not have from its own resources.” Star Diamond is required to pay a 40 per cent share of expenses in terms of the agreement.

Star Diamond also contends that Rio Tinto, by failing to have the bulk sampling plant operational, (it was intended to be up and running by late 2018), has been unable to provide results of testing to show if experimental trench cutting methodology had been a success. “To require Star Diamond to fund its proportionate share of an additional $106,448,904, without first providing access to results, data and information that confirms the project has significant commercial merit is …unreasonable and inconsistent with generally accepted mining industry practices,” the lawsuit states. Among relief being sought by Star Diamond is a declaration that Rio Tinto breached the agreement, as well as damages. It has also called for an interim injunction restraining Rio Tinto from exercising any of its rights until the determination of the court action.