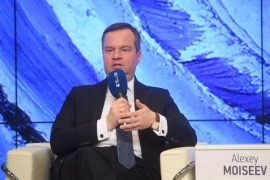 Alexey Moiseev, Russia's Deputy Minister of Finance and Kimberley Process (KP) Chair, last week held a briefing to highlight the priorities of the Russian chairmanship in the Kimberley Process (KP) in 2020, according to a release from the Ministry of Finance. Moiseev noted that one of the key priorities of the Russian chairmanship was to update the definition of conflict diamonds and stemming their flow to the market. The KP's current definition of 'conflict diamond', which many observers consider as too narrow, describes conflict diamonds as 'rough diamonds used by rebel movements or their allies to finance conflict aimed at undermining legitimate governments'.

Russia has put forward a proposal to revise and update this definition, expanding its scope beyond rebel movements and their allies to include armed groups, terrorist groups and criminal networks supporting them. Last year, at the end of the KP’s three-year review and reform cycle with India serving as the KP Chair, the World Diamond Council (WDC) and the KP NGO members made a final push to broaden the scope of the KP: “Recognizing the outdated definition, the WDC, along with civil society and a number of government representatives, are insisting that it be amended to include instances of unacceptable violence in the supply chain during peacetime as well," wrote WDC President Stéphane Fischler. The effort ultimately fell short. "Therefore," Moiseev said, "additional efforts are required to finalize the discussion. We are convinced that it is one of the most important areas of work during the Russian chairmanship."

Moiseev also pointed out that Russia, together with Botswana as the current KP Vice Chair, jointly intend to initiate adoption of Principles for Responsible Diamond Sourcing Framework. “These principles should signal the KP support of the diamond industry self-regulation measures and efforts to promote best practices on human rights, environmental protection, development of local communities, anti-corruption and differentiation between the natural and synthetic diamond markets.” If adopted, a new Administrative Decision will make a good basis for the future work of the KP, adds Moiseev.

Another priority area mentioned at the briefing was the full restoration of the Central African Republic in the KP after its suspension in 2013 following the outbreak of civil war. In 2015, the ban was partially lifted, authorizing exports from the so-called “green zones” controlled by the CAR government. However, Moiseev explained, the ban on exports from the CAR does not significantly reduce the problem of conflict diamonds in the Republic. “As the KP Chair we are willing to render assistance to the Government of the CAR in adopting effective monitoring mechanisms. Our objective is to initiate the introduction of such mechanisms that will help people to operate lawfully and minimize the risks of illegal trade,” commented Moiseev. He also prioritized the accession of the new participants to the KP - countries engaged in either rough diamond trade or mining. He plans to reach out to them.

Mr. Moiseev commented on other key issues to address during Russia's year as the Chair of the KP: concerning the establishment of a permanent secretariat, he said that five states have submitted applications to host it, saying that Russia was prepared to host a permanent working body; he encouraged the KP to digitalize KP certificates for the sake of transparency and to end falsification; and he discussed the issue of having separate classifications for natural and synthetic polished diamonds.

“We have nothing against synthetics, but we consider it unacceptable if at the point of sale synthetics are passed for natural diamonds. One of the key issues is the differentiation of the said two markets, and we cannot let the generally accepted international classification of natural polished diamonds be applied to laboratory-grown polished diamonds”, Moiseev said. In our opinion, there is currently no need to develop and introduce any classification for synthetic polished diamonds, since as any mass product they lack such attributes of natural diamonds as rarity, value and uniqueness, which implies quality control of the product." The 2020 KP Intersessional meeting will take place in Moscow on June 8-12 and the Plenary meeting in St. Petersburg on November 16-20.