Newfield On Track To Start Diamond Production in Q4 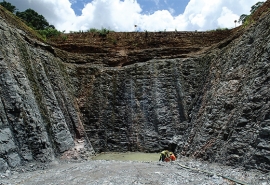 Newfield Resources is on track to produce the first diamonds from its Tongo diamond mine in Sierra Leone in the fourth quarter of this year, the company announced last week in a press release. Newfield Executive Director, Karl Smithson, said the ASX-listed company is ready to commence the drilling and blasting of the underground decline.

The announcement followed the arrival of the mining and support equipment: underground drill rigs, loaders and haul trucks have arrived and been commissioned on site slightly later than planned due to shipping delays out of China. The machines (two jumbo drill rigs, two 15 tonne haul trucks and two load, haul and dump machines/loaders) have been customs cleared, have undergone commissioning and are now ready to commence drilling, blasting and hauling of the underground decline at the portal. Support equipment for the decline development has also been shipped out of South Africa and received on site.

Stripping back of the upper levels of box cut has been completed and the area for the portal entrance prepared for drilling and blasting. The fabrication of many of the plant components is ongoing in South Africa and shipping of the first items will commence in Q2. Three X-Ray machines for the final recovery process were factory tested in South Africa during December and have subsequently been shipped and received on site. "We remain on track to produce our first diamonds in Q4 2020 and look forward to providing further updates as we progress,” Smithson concluded. Newfield acquired the mine from Stellar Diamonds early 2018. It has an initial ore reserve of 1 million carats, a resource of over 7 million carats and an initial 8-year life with peak annual diamond production of 260,000 carats forecast in Year 5.