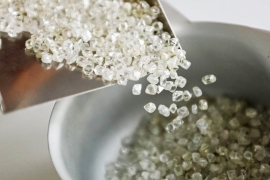 Firestone Diamonds has reported that production during the second fiscal quarter (ended Dec. 31, 2019) fell significantly on account of the disruption in power supply to the mine in October. The power supply to the mine was disrupted on 1 October, causing the processing plant to be shut down until 26 October when an alternative electricity supply was provided by diesel generators. During this time, no ore could be treated. The mine ran on generator power until until 1 December when the grid power was restored and operations returned to normal. The total additional cost associated with renting and operating the diesel generators during the quarter was US$1.1 million with the total cash impact due to the power disruption estimated at US$4.6 million.The company added that it was revising its production guidance for the full year as a result.

The power disruption also resulted in lower sales volumes and revenue: during the quarter, sales volumes decreased by 21% to 132,885 carats compared to 168,612 carats sold in Q1, and fell by 31% compared to 191,735 carats sold in Q2 2018. However, average diamond values of $73 per carat were higher than $63 per carat in the previous quarter due to a number of larger and better-quality diamonds that were recovered and sold, including one diamond larger than 100 carats diamond and two stones larger than 90 carats. The average price in Q2 2018 was $72 per carat. Owing to the large diamonds sold last quarter, Firestone's Q2 2019 revenue was $9.7 million, representing an 8% decline from the $10.6 million in the previous quarter and a 30% decline from the $13.9 million earned in Q2 2018. The miner said their prices realised for the smaller goods that make up the bulk of our production remain subdued.

"The unexpected power disruption had a devastating impact on production and revenue generation," said CEO Paul Bosma. The multiple challenges facing the company played a part in their decision announced earlier this week to delist from AIM - London Stock Exchange’s international market for smaller growing companies - pending shareholder approval. "The electricity supply disruption has exacerbated an already challenging outlook for the Company," they noted, "resulting in an inability to meet its scheduled debt repayments in the near term and as a result, agreement was reached with ABSA Bank to defer the December capital repayment of US$2.5 million.