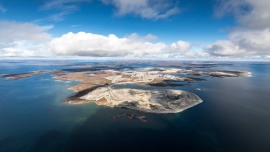 Rio Tinto's diamond division recorded a $21 million loss for FT 2019 as its revenues fell 11% to $619 million from $695 million a year earlier, according to the company's Annual Results released on Wednesday. Earnings before interest, tax, depreciation and amortization (EBITDA) tumbled by 50% to $151 million from $301 million in 2018.

Overall production fell 8% to 17,030 million carats from 18,427 the previous year, with both the Agyle mine (Australia) and the Diavik mine (Canada) contributing equally to the decline. In the punultimate year of the Argyle mine's life, carat production was down by 8% due to a lower recovered grade, though this was partially offset by record underground mining and processing rates. At Diavik, carats were also down by 8% due to lower ore availability and grade from the underground operations, though this was partly offset by higher tonnes and grade from the A21 open pit.

Rio Tinto has given a production guidance for 2020 of 12 to 14 million carats, an estimate that "reflects the expected closure of Argyle in the fourth quarter of 2020 and lower grades at Diavik." They noted that exploration is progressing at the FalCon diamond project in Canada. FalCon is a previously explored gem-quality diamond resource in Saskatchewan. The name recognises the Fort à la Corne Provincial Forest in Canada where the resource is located. Rio Tinto acquired a majority stake last year in the project owned by Star Diamond.