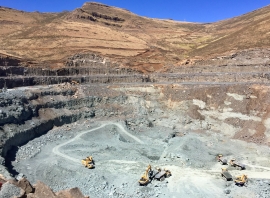 Firestone Diamonds this morning (Feb. 25) announced its plans to cancel its AIM listing as its anticipated value of its diamonds never materialized, leaving the miner unable to service its debt. The deterioration of the rough diamond market in 2019, putting additional price pressure on the smaller stones that form the bulk of the diamonds recovered from the Liqhobong mine is Lesotho, effectively sealed the deal. Firestone says that the costs associated with maintaining the AIM listing provide minimal benefit and the funds can be better utilised to extend the company's operating window.

"After commencing mining production at the end of 2016, it became clear during 2017 that the anticipated average value of $107 per carat was not being achieved and as a result, Liqhobong Mining Development Company (Pty) Limited, the 75% owned subsidiary of the Company ("LMDC"), would be unable to service its scheduled debt repayments to ABSA Bank Limited in respect of its $82.4 million project debt finance facility," the company writes. Firestone says it "identified towards the end of 2019 that once again LMDC would be unable to service its ABSA Bank debt repayments as they became due and therefore embarked on a further round of discussions and negotiations with its principal lenders." This led to another debt repayment standstill and to the provision of a temporary working capital facility. The miner is also working on a longer-term restructure of its outstanding ABSA debt of US$63.9 million and its Series A and B Eurobond debt of US$38.4 million.

The company says it "still believes that the diamond market has the potential to improve but that it will take longer than had been previously anticipated and therefore everything possible needs to be done to ensure that the Company can survive the current downturn using its existing cash resources." This led them to review all costs and expenses, including the costs associated with being listed. "The Directors have conducted a review of the benefits and challenges of maintaining the Company's listing on AIM and after careful consideration, have concluded that it is no longer in the best interests of the Company and its Shareholders."

"In conclusion," they write, "the Board believes that it is in the best interests of Shareholders, employees and lenders to reduce costs and preserve cash by all means possible to ensure that the Company survives the market downturn. Accordingly the Directors consider that Cancellation and approval of the Cancellation Resolution is in the best interests of the Company and its members as a whole." The company will hold a general meeting on March 13.