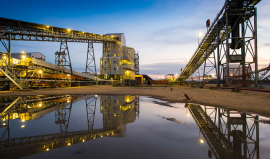 Lucara Diamond Co. pulled off a strong performance in 2019 despite a tough market and achieving a lower average price per carat than in the previous five years, largely due to a solid performance in the final quarter and record production through the plant in 2019. The miner, which owns and operates the Karowe mine in Botswana, earned total revenues of $192.5 million (2018: $176.2 million) from the sale of 411,732 carats, or $468 per carat (2018: $502 per carat) during fiscal year 2019, beating their guidance of $170 million to $180 million.

The miner's fourth quarter revenue of $56 million from the sale of 98,547 carats was its best earning period of the year and easily surpassed the $40.6 million earned in Q4 2018. The uptick arrived on the back of a substantial increase in the average price earned per carat; $568, compared to $367 in the same period last year. They note that the general improvement in pricing as compared to earlier in the year, combined with a higher value blend of ore to the process plant resulted in better than expected revenue for the quarter and for the year. The increase in average price per carat sold, along with a 10% decrease in operating expenses per carat sold, resulted in an operating margin of 63% in Q4 2019; this represents a significant improvement from the 36% operating margin achieved in Q4 2018. Operating expenses decreased approximately 20% from $25.8 million in Q4 2018 to $20.6 million in Q4 2019.

Lucara's Adjusted EBITDA in Q4 2019 increased $22.8 million from $4.7 million in Q4 2018.  The significant quarter-to-quarter increase resulted from the combination of a $13.9 million increase in net revenue and a $5.2 million decrease in operating expenses. Lucara also added total sales volumes of $8.4 million from 15 sales on its digital sales platform Clara, predominately from the sale of Karowe goods. As of December 31, 2019, the customer base had increased to 27 participants. They note that third-party supply will complement the diamonds from Karowe which are sold through the platform and will support increased transaction volumes through 2020.

In 2020, the Company forecasts revenues between $180 million and $210 million, as the proportion of carats recovered from the higher grade M/PK(S) and EM/PK(S) units increases. Diamond price assumptions are considered to be consistent with 2019. The Company expects to recover 350,000 to 390,000 carats from the processing of 2.5 to 2.8 million tonnes of ore. Diamonds sold are expected to be between 350,000 carats and 390,000 carats. A budget of up to $53 million has been approved for early works related to a proposed underground mine at Karowe. They said an investment decision, subject to receipt of all required authorizations and the arrangement of financing, is expected in H2 2020. The feasibility study completed in 2019 demonstrated the potential to extend the mine life at Karowe to 2040.

"Our strong operating results for 2019 reflect Lucara's continued focus on safe, reliable operations which has delivered increased productivity at lower costs and provides a solid foundation to support our next stage of growth - an underground expansion at Karowe which has the potential extend our mine life to 2040, add net cash flow of $1.22 billion and gross revenues of $5.25 billion," said Eira Thomas, President & CEO. "Our second business, Clara, continues to deliver solid results and is on track to steadily grow third party supply to the platform over the course of the coming year. In 2019 Lucara also continued to explore ways and means to maximize the value it receives for its diamonds. Our ground-breaking agreement with Louis Vuitton in January 2020 [to whom Lucara sold the historic 1,758-ct Sewelô diamond] is another example of how we are delivering on this commitment. Through this agreement, we will demonstrate that greater collaboration within the supply chain can unlock value and increase transparency from mine to consumer." The miner recovered 31 diamonds in excess of 100 carats during the year of which 2 stones were in excess of 300 carats.