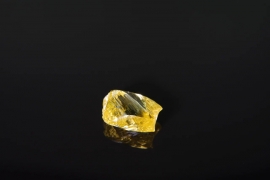 Russian diamond miner Alrosa has unearthed the first colored rough diamond at its new Verkhne-Munskoye deposit in Yakutia, which started operations in 2018. The exceptional stone is a bright yellow gem-quality diamond weighing 17.44 carats, recovered in mid-February from the Zapolyarnaya kimberlite pipe, a part of the Verkhne-Munskoye deposit.

“This is the first rough diamond with bright color found at the Verkhne-Munskoye since it was launched in 2018,” said Evgeny Agureev, Deputy CEO of ALROSA. “The United Selling Organization of ALROSA will assess and evaluate this stone in detail. We hope this deposit will give us more large and interesting discoveries in future.” In 2018, the miner announced it was pursuing the goal of "becoming the world leader in the production of colored diamonds,"  holding its first 'True Colours' auction in Hong Kong where it earned $9 million from 210 stones.

Alrosa announced earlier this week that it has sold a 6.21-carat cushion cut Fancy Intense Pink Purple diamond to Larry West, owner of one of the world's largest collections of exceptionally rare fancy-colored diamonds, for an undisclosed price. Alrosa cut and polished the diamond from a 20.18-carat stone found in Yakutia, a region in northeastern Siberia, in August. And on December 24, 2019, Alrosa announced that Graff Diamonds had acquired the Firebird 20.7-carat polished diamond for an undisclosed amount. The diamond was created from the “Stravinsky”, a 34.17-ct rough diamond,discovered at the Ebelyakh mine in Yakutia in 2017, which is one of the largest rough diamonds of such color and quality ever extracted in Russia.

Alrosa mines natural-color rough diamonds mostly in the Arkhangelsk region and in the north of Yakutia. Colored, gem-quality stones comprise less than 0.1% of Alrosa's overall output. According to the GIA, only one in 10,000 diamonds has a fancy color, their rarity increasing their value exponentially. The Verkhne-Munskoye diamond deposit is located in the west of Yakutia and it is expected to yield about 1.8 million carats of rough diamonds per year; its reserves are sufficient to continue mining for more than 20 years - until 2042.