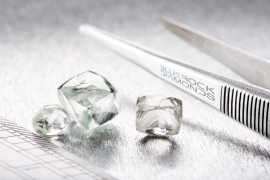 BlueRock Diamonds, an AIM-listed company that operates the Kareevlei Diamond mine near Kimberley in South Africa, has raised £1.9 million ($2.45 million) which will "primarily" be used to fast-track a doubling of production at Kareevlei and to reduce unit costs significantly, the company reported on Tuesday. The junior miner raised the funds by means of an oversubscribed placing and subscription of 2,235,289 new ordinary shares of 5 pence each in the Company (the “Placing Shares”) at a price of 85 pence per Placing Share.

“Securing these funds from new and existing shareholders represents an endorsement of the opportunity that Kareevlei offers to build production, revenues and profitability," said BlueRock Executive Chairman, Mike Houston. "Thanks to this Placing, BlueRock can fast-track a material increase in production volumes from the 323,000 tonnes achieved in 2019 to a run rate of +/- 750,000 tonnes per annum and a consequent expected increase in carats to over 30,000 by the end of 2020." He said the company will continue to optimise its profitability by reducing its unit costs through investing in infrastructure, as well as reaping the benefit of improved economies of scale. He said their target is to reduce the production cost per carat by approximately US$50.

Reducing the cost of production will be crucial to the mine's future health, as the cost per produced carat in H2 2019 was US$275, which, while very high, nonetheless fell from the US$300 per carat in August and September - the first two months of operating at near capacity. Fortunately, BlueRock's sale price per carat in Q4 2019 was a robust US$410, which shows the quality of the diamonds they are producing - 90% of which are gem quality.

Kareevlei hosts five known diamondiferous kimberlite pipes with a combined inferred resource of 7.7 million tonnes / 367,000 carats (Nov 2018). BlueRock is currently mining two of those pipes, the KV1 and KV2, with KV5 and KV3 planned to be in production by Q3 2020 and 2021 respectively. Kareevlei has a 10-year life of mine (LOM) based on the current resource statement and production of 750,000 tonnes. However, the company states that this estimate is expected to increase materially given that KV1 is approximately 25% larger in area and the improved unit revenue and cost structure and diamond recovery will enhance the economic value and potential depth of the various pipes. The Company expects to update its Resource Statement in 2020.

As announced on 21 January 2020, BlueRock achieved an aggressive FY 2019 guidance, increasing production volumes by 70% to 323,000 tonnes, and carats sold by 118% to 12,675 carats. The average price of carats increased by 24% to US$415 and the grade of diamonds improved to 4.34 cpht. The miner recovered a number of high-grade diamonds which they say is due to moving into purer kimberlite mining; in 2019 a total seven stones were sold for in excess of US$50,000 per stone.

To reduce their unit costs by approximately 20%, BlueRock entered into a rent-to-buy agreement to acquire a processing plant from Numovista which has a larger capacity that their existing plant. Both plants are expected to be fully operational during Q4 2020, at which point the company is expected to be operating at an annual run rate of approximately 750,000 tonnes, and with an improved recovery rate. They have also entered into an agreement to connect to the National Grid; they say getting power from the grid costs less than 30% than diesel generated power and that even allowing for the potential of load shedding, the investment of approximately £350,000 (US$450,000) required to connect to the grid some 20km distant from the plant has a payback period of less than 18 months and is expected to reduce the cost per carat by approximately USD 15 to USD 20 per carat. They estimate the increase in output will reduce costs by approximately US$35 to US$40 per carat.