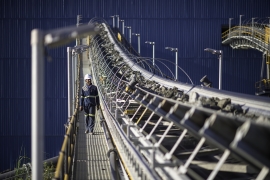 Petra Diamonds concluded H1 FY 2020 (the six months to 31 December 2019) with a $10 million net loss as ongoing market weakness and an "adverse product mix" (lower quality diamonds) which weighed on their profit from mining activities. The London-based miner reported a net loss of $10 million for the period, which represents a sizeable improvement on its $57.9 million loss in the first half of 2019. While optimism had started to return in recent months concerning improved market conditions, it has been eroded by the outbreak of the coronavirus in China, which negatively impacted consumer spending around the Chinese New Year.

The mid-tier miner reported a 6% decline in revenue to US$193.9 million in the Period (H1 FY 2019: US$207.1 million) mainly due to lower diamond prices and the previously-mentioned adverse product mix at the Finsch (South Africa) and Williamson (Tanzania) mines. Rough diamond pricing on a like-for-like basis fell ca. 10% from the comparable period, and was down ca. 3% versus pricing achieved in Q4 FY 2019. This decline was partially offset by the sale of the exceptional 20.08 carat blue diamond from the Cullinan mine which was sold in November for $14.9 million, or $741,000 per carat. They note that continued supply discipline by the leading diamond mining companies will remain a key factor in the health of the rough market in 2020.

Production in the first half was up 3% to 2,070,240 carats (H1 FY 2019: 2,019,147 carats). Petra CEO Richard Duffy said this strong production performance is in part being driven by the implementation of Project 2022, which has throughput as its major contributing factor. The miner is on track to meet its full-year guidance of approximately 3.8 million carats, though it had a slower start to the calendar year (H2 2020), particularly at the Cullinan mine, but also due to the recent pit slump at the Williamson mine. The potential for continuing electricity shutdowns due to 'load shedding' in South Africa remains a risk fo production.

CEO Duffy noted that Project 2022 remains on track to deliver significant cash flow generation, reaching an annualised rate of US$50 – 80 million. However, the operational cash flow benefits are being eroded by a weaker diamond market, coupled with the impact of adverse product mix, and as a result Project 2022’s cumulative cash flow target is expected to be delayed, resulting in the US$150–200 million targeted being revised to US$100–150 million by June 2022. He noted that the implementation of Project 2022 and the company's emphasis on cost control led to an adjusted EBITDA of US$67.2 million and positive operational free cashflow of US$13.7 million during H1 FY 2020, despite the weaker pricing environment. While this led to a 11% decline in EBITDA, their EBITDA margin is "robust" at 35%. Net debt increased during the period, opening at $564.8 million and having a closing balance of $596.4 million.