Gem Diamonds Ends Down Year on a High Note 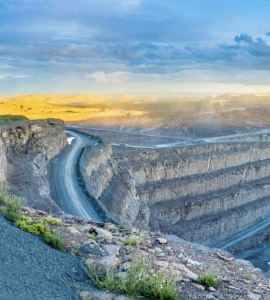 Gem Diamonds, the London-based miner that operates the famous Letšeng mine high in the mountains of Lesotho, reported a major uptick in its fortunes in the fourth quarter of 2019 as revenue for the period (Oct. 1 - Dec. 31) increased 41% over the previous quarter on a near-equal rise in the volume of carats sold and the average price per carat. The improved performance was sorely needed, as even with the Q4 increases the miner's 2019 fell by a third in a difficult market.

"Following pressure on the prices for the larger high-quality diamonds seen during 2019, signs of improvement were noted in December 2019 and this has continued into 2020," Gem said in a statement, noting that the average price achieved further improved to $1,753 per carat for the first tender of 2020. "Diamond prices for the smaller commercial type goods remained under pressure during 2019 with polished inventory levels remaining high. However, improvements in demand were noted in December 2019 as the midstream started to restock. Further improvement in the prices of these goods has been confirmed during January and February 2020," said the company. The improvement in diamond market conditions could be the catalyst to restore investor interest, which has been poor throughout the year.

While Q4 and the improving market offered hope, revenue for the full calendar year dropped 32% to $182.1 million compared to $266.6 million in 2018. The miner recorded an average price of $1,637 per carat in 2019, representing a 23% decline against the $2,131 earned in 2018. Gem recovered four diamonds greater than 100 carats during Q4, bringing the total to eleven diamonds greater than 100 carats for 2019 as compared to 15 such recoveries in 2018. Following the recoveries in 2019, Gem Diamonds has now unearthed 100 diamonds larger than 100 carats at Letšeng since Gem Diamonds began operating the mine in 2006. They sold 7 diamonds for more than US$1.0 million each in Q4, generating revenue of US$15.6 million. In total, the miner sold 27 diamonds for more than US$1.0 million each during 2019, generating revenue of $68.2 million. This means that 27 diamonds were responsible for 37% of Gem Diamonds' revenue.