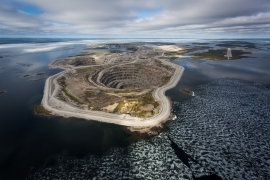 Dominion Diamond Mines and its owner The Washington Companies has appointed Patrick Merrin to be its new interim chief executive officer, taking over from Shane Durgin who has left Dominion to “pursue other opportunities,” according to Dominion’s statement. He is the miner’s third CEO since The Washington Companies took over the Canadian diamond miner in November 2017 for $1.2 billion, acquiring all of the issued and outstanding common shares of Dominion for US$14.25 per share in cash. JCK's Rob Bates points out that the miner has had five different CEOs over the past five years.

Merrin was named The Washington Companies CEO - Mining just over a month ago, where he is tasked with providing oversight of existing Washington Companies’ mining operations at Montana Resources in Butte, Montana, and Dominion Diamond Mines in the Northwest Territories, Canada, as well as any potential expansion opportunities in the future. Merrin said in a statement, “I am excited to be working more closely with the Dominion team and help realize our opportunities to improve near-term operating performance and continue to pursue its long-term exploration potential. I appreciate the confidence of the Washington Companies and the entire Dominion team as we enter an exciting new chapter for the company.”

Merrin is replacing Shane Durgin, who has occupied the CEO chair since December 2018, when he took over from diamond mining veteran Patrick Evans, who left the company after just over a year at the helm after spending twelve years as CEO of Mountain Province Diamonds. Evans reportedly left to launch a company making laboratory-grown diamonds, though he told JCK that he has moved on from that company as well to lead a company looking to mine natural diamons in Brazil. Evan's predecessor, Brendan Bell, was a former N.W.T. cabinet minister-turned mining executive who served as CEO for two years and cited the company decision to move its corporate headquarters from Yellowknife to Calgary as a factor in his exit. Bell had taken over as CEO in 2015 on behalf of company founder Robert Gannicott, who stepped aside for medical reasons. Gannicott has since passed away.