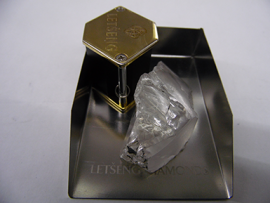 Gem Diamonds officially rang in the new year with the recovery of an exceptional 183-carat white Type IIa diamond on 3 February 2020. On the same day, the company said, they also recovered another two high-quality diamonds, one of 89 carats and the other of 70 carats, from the Letšeng mine in Lesotho.

The London-based miner owns 70% of the Letšeng mine in Lesotho, which is famous for the production of large, top color, exceptional white diamonds that make it the highest dollar-per-carat kimberlite diamond mine in the world. Through the first three quarters of 2019, the miner recovered 11 diamonds weighing more than 100 carats, four of which were yellow stones. The miner last year also recovered and sold a 13.33-carat pink diamond for a Letšeng record of $656,933 per carat. Gem Diamonds is currently holding its first sale of the year in Antwerp, and will announce its fourth-quarter results on Thursday, 13 February. After hitting a five-year low at the end of 2019, Gem Diamonds' share price has gained about 40% since the turn of the calendar, but is still only worth about 70 GBX (£0.70).