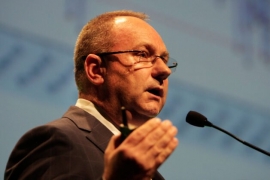 In a wide-ranging keynote address at the African Mining Indaba taking place this week in Cape Town, Anglo American CEO Mark Cutifani laid out his vision for the mining industry and the steps it must take to "connect the future of mining with emerging and next-generation societal values. These are the values of increased transparency, responsible technological innovation, sustainability and shared prosperity, all of which are emergent in our world and are shaping a very different future society."

He started out by noting that "Despite mining’s clear contribution to almost every aspect of modern life ... mining continues to face a crisis of reputation. We are still seen as an industry that takes more than it gives, even though we drive 45% of the world’s economic activity, whether directly or indirectly – while disturbing a small fraction of the earth’s surface. None of us here today is oblivious to the criticism that is levelled at us." That criticism comes from the consuming public, investors demanding more attention to carbon emissions and local populations whose environment is disrupted by large mining operations: "mining’s social licence to operate is under significant strain," he said, which increases the need for innovation and "becoming better connected to the needs of our host communities and society in its broader sense. At Anglo American, we believe that mining has a safer, smarter and more sustainable future – and that is the future we are working towards."

Noting that the global population is estimated to reach 9.5 billion by 2050, with an even faster growing consumer class in the developing world, he said the "challenge is clear: we need to do things differently to find new, safer, more sustainable and cost-effective ways to supply the essential raw materials to meet the needs of a rapidly growing and urbanising global population for decades to come." Importantly, however, no increase in output will move the needle on societal progress if mining is disconnected from a clear purpose: "it is important to reflect on the power of being purposeful in how we envisage the future of mining," and he defined AA's purpose as follows: "to re-imagine mining to improve people’s lives. In the end, this is all that matters: people. Our success as an industry is ... also measured by whether we improve people’s lives."

Cutifani identified transparency as one of the fundamenals of mining: "I cannot think of a better way to earn [society's] trust than by demonstrating open and transparent stewardship of mineral resources." He identified De Beers' Tracr platform and its GemFair program as two significant initiatives to foster responsible sourcing and consumer confidence. "Mining," he said, "like many other industries, is susceptible to a handful of those who want to cut corners – through illicit activities, unethically sourced minerals and a host of other corruption-related activities ranging from mining rights to permits. We cannot ... allow this to continue. We must act."

To provide consumers and other stakeholders with improved assurance regarding a diamond’s authenticity and responsible sourcing through to the point of sale in a jewelry store, Anglo American and De Beers developed Tracr, a blockchain-enabled technology platform that helps create trust among the various industry actors. Speaking of Tracr, he said, "we were clear when we developed Tracr that this wouldn’t be a De Beers-only platform. Instead, we worked on building a platform that the entire diamond industry could use in the quest to be more open and transparent. Since its launch, Tracr has attracted a broader base of diamond producers, midstream businesses, and retailers. This collaboration has helped build significant momentum, and we believe that Tracr’s data-backed authentication capabilities hold tremendous promise. Assuring our stakeholders and wider society that the diamonds we produce are natural, ethically sourced and legitimate, carries significant value for them and the entire diamond value chain."