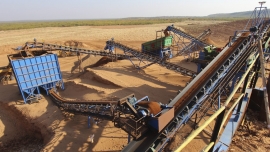 Diamcor, a publicly-traded junior diamond mining company based in Canada and operating in South Africa, saw the prices achieved for its rough diamonds fall sharply again in the third fiscal quarter ending December 31, 2019. The company sold 13,218 carats, generating gross revenues of US$1.4 million, which resulted in an average price of US$107 per carat for the period, declining from $149 per carat achieved in Q2 and $196 in Q1. The decline in price was "expected" due to "the significantly higher percentage of smaller, lower quality rough diamonds being recovered" as the miner was mainly re-treating already processed rock (tailings).

Due to the timing of Diamcor's sales schedule, with the final Q2 tender in Antwerp closing after the new fiscal quarter began - and thus going on record for Q3 - the miner only sold 3,760 carats in the prior quarter for gross revenues of USD $560,059. Compared to the same quarter in 2018, Diamcor achieved the same earnings - $1.4 million - but they needed to sell almost twice as many diamonds to reach that figure: 13,218 carats in 2019 compared to 7,162 carats last year.

On the positive side, because Diamcor was focusing on reprocessing tailings, they enjoyed a significant reduction in the operating costs normally associated with quarrying operations, heavy equipment, and fuel consumption. The miner anticipates delivery of a new, larger heavy equipment fleet to the project prior to the end of January 2020, at which point it will conclude the current tailings re-treatment exercises and resume recovery of material from the project’s quarry at increased levels. They expect the average dollar per carat achieved to return to historically higher levels given that all size fractions of material will again be processed.