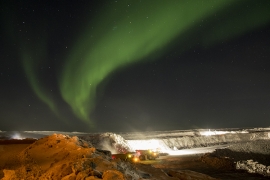 Mountain Province Diamonds turned in a very strong production performance at the Gahcho Kué mine in Canada, particularly in the fourth quarter, but a 15% decline in the average price achieved for their rough diamonds over the course of 2019 dragged their proceeds down. A slightly lower recovery grade also curtailed their carat recovery, which ended just below 2018 levels. Still, the miner confirmed that Q4 and FY 2019 production results "were better than [ou] expectations, with recovered carats for FY 2019 coming in higher than the revised guidance of 6.7 – 6.8 million carats, attributable to the strong operational performance in Q4 2019."

On the production side, despite considerable gains in Q4, where MPD (and the Gahcho Kué mine) increased its carat recoveries by 28%, carat production for the year fell 2%. Total annual diamond production at Gahcho Kué was 6.8 million carats, with MPD's share being 3.3 million carats (Mountain Provice has a 49% share of the Gahcho Kué JV with De Beers Canada). Q4 production at the mine reached 1.98 million carats (1.55 million in Q4 2018. The tonnes of ore treated jumped 25% in Q4 and 12% for the year. "During FY 2019, the plant treated a record 3.58 million tonnes of ore, 12% higher than was achieved in FY 2018, demonstrating that the plant modifications of the past 12 months have been successful and the plant throughput capacity has significantly increased."

""Following the successful plant changes which have created more capacity and opportunity, I believe Mountain Province is well positioned for the next decade,' said Brown. "Gahcho Kué has a long mine life, and as demonstrated in 2019 with the discovery of the Wilson Kimberlite a strong potential for additional discoveries in our highly prospective land package."