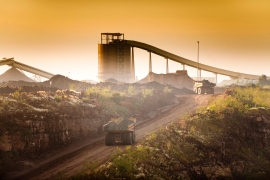 De Beers Group Q4 rough diamond production decreased by 15 percent to 7.8 million carats from 9.1 carats a year earlier, driven by lower production levels in South Africa and Botswana, the company announced this morning. They commented, "While trading conditions have improved since Q3 2019, production was reduced in response to softer rough diamond demand conditions experienced in the year." Full-year diamond output fell 13% to 30.8 million carats from 35.3 million carats in 2018. The miner sold 8% fewer rough stones last year, yet their overall sales declined 25% due to a 20% decline in the average price per carat.

Production in Botswana, where De Beers obtains the majority of its rough diamonds, was down 7% to 5.9 million carats. Output at the Orapa mine decreased 29% due to a delay in an infrastructure project and expected lower grades. The decline at Orapa was partially offset by a 21% increase at the Jwaneng mine, driven by planned increases in both tonnes treated and grade. Output in South Africa declined the most in Q4 - 65% - due to lower volumes of ore mined at the Venetia mine as it approaches the transition from open pit to underground. Voorspoed production ended in Q4 2018 when it was placed onto care and maintenance in preparation for closure. Q4 output in South Africa was only 400,000 carats.

While the volume of carats sold fell 8%, the value of De Beers rough-diamond sales declined 25% on the year, to $4.04 billion from $5.39 billion in 2018. The more significant decline in sales is attributable to the 20% decline in the average price per carat, which fell to $137 per carat from $171 per carat in 2018. De Beers attributed tumbling prices to a weaker product mix in the form of a higher proportion of lower value rough diamonds sold, and a 6% lower rough diamond index.