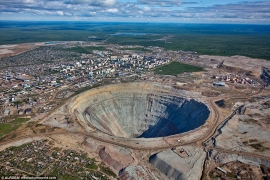 Russian diamond miner Alrosa has started drilling at the Mir kimberlite pipe as part of the company's investigation into the safety and economic feasibility of restarting production at its unique diamond deposit, the miner announced last week. The company said it will commence its studies at the depth of 1,200 – 1,600 meters below the surface in an effort to define more precisely the pipe’s dimensions, its position, diamond quality and grades, as well as geological conditions and hydrogeology of the deposit. Total exploration costs are estimated at $32.5 million (RUB 2 billion).

On August 4, 2017, a flood at the mine resulted in the death of eight miners and Alrosa shut down the mine indefinitely. Prior to the accident, the Mir kimberlite pipe was one of the jewels in Alrosa portfolio, with the underground mine at Mir reaching full capacity of 1 million tons of diamond ore in late 2016. At that rate, the company said the Mir pipe could operate for another 50 years, Alrosa described the Mir underground mine reaching capacity as its operational highlight of 2016, with the mine capable of producing $400 million worth of diamonds a year. The Mir open pit operation was discontinued in 2001. The underground mine produced its first diamonds in 2009.

Alrosa now expects to carry out exploration over 2020-2021, with the reserve estimate report to be prepared in 2022. As announced last year, Alrosa said the future of the deposit is uncertain and any decision about the future of the mine requires additional exploration of the deposit’s deep levels. The decision to restart the mine will depend on obtaining positive economics of the project provided they can achieve the highest level of industrial safety at the construction and mining stages will be achieved. If both conditions are met, a reconstruction of the mine may start no earlier than 2024. Preliminary estimates show that these works will take another 6-8 years.