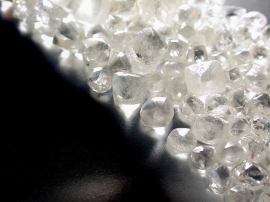 Angola's industrial diamond miners produced 9.09 million carats in 2019, a decline of 5% on the year. Adding semi-industrial production to industrial output, the total was 9.12 million carats. The figures came courtesy of Ganga Júnior, the president of Angola’s state diamond exploration, mining and licensing company, Endiama. He attributed the declline (4.8% the actual figure cited) to the closure of a diamond mine. He said the semi-industrial diamond sector had accounted for the production of 35,856 carats last year.

In terms of sales, the head of Endiama said the industrial sector sold just over 9 million carats at an average price of US$138.6 per carat, which is 18% lower than the $168 per carat reportedly earned in 2018. The overall total of rough diamonds sold in 2019 – including industrial and semi-industrial diamonds – was 9.15 million carats, the president of Endiama said. He said Angola sales in 2019 reached US$1.263 billion, or an increase of 10% year-over-year, which resulted in an additional revenue of $34.7 million.

It is worth noting that the 2018 production, sales and average price figures noted here do not exacty match those announced last year, when Ganga Júnior announced that Angola's 2018 output was 9.43 million carats (3.5% higher output), with 8.26 million carats sold for $149 per carat (instead of $168), for total revenues of $1.2 billion. We also note, however, that it is unclear if last year's announcement includes semi-industrial output and sales.

At the same meeting, the president of Endiama said the state company is aslo negotiating the return to the country of De Beers and the possible entry of Rio Tinto, two of the largest mining groups in the world. José Manuel Ganga Júnior acknowledged in an interview with state newspaper Jornal de Angola that it is important for the country to have the involvement of these two mining groups, “to support the national industry, earn money and raise the bar in terms of production.” De Beers mined diamonds in Angola between 2005 and 2012 when it left its concession due to a lack of results, and the president of Endiama has now said that negotiations are underway for the group to return. The world's biggest diamond company, Russia’s Alrosa already has a strong presence in the country. Alrosa and Endiama each own 41% of Catoca, which produces three quarters of all Angola’s diamonds. LL International Holding B.V. owns 18 percent.

He further announced that Endiama intends to have its shares listed on the stock exchange in 2022 and recognised that “being listed means having absolute transparency, the accounts must be open and we must not have management reports full of reservations.” He said that although the aim is to be listed on the stock exchange, the Angolan State will continue to monitor the company, adding that although the percentage of capital to be sold had yet to be defined, it would likely be no more than 30%.